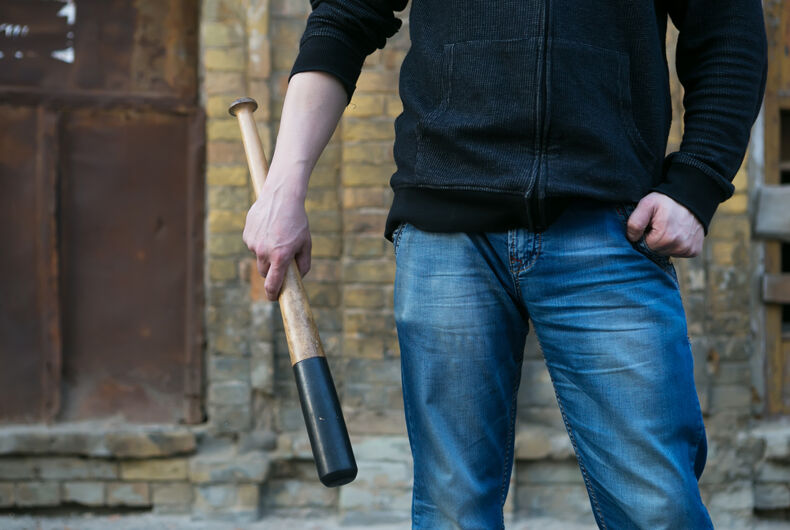 Bulgarian presidential candidate Boyan Rasate has been arrested after he led a violent attack on an LGBTQ community center.

Rasate led a mob of approximately a dozen supporters into the Rainbow Hub Community Centre building, where they smashed furniture, spray painted walls, and attacked peaceful human rights activists. Rasate is accused of punching a woman while brandishing a knife.

Related: 25% of straight people would be “uncomfortable” seeing a gay co-worker’s wedding picture

Founder of the Bulgarian National Union (BNS) political party, Rasate is known for his extreme rhetoric about LGBTQ people and migrants. The party is no longer under his leadership and all of the major political parties have condemned his actions.

Rasate was arrested after leaving a television station where he had participated in a program about the upcoming election. He is charged with hooliganism and infliction of an injury on activist Gloria Filipova for punching her in the face as he forced his way into the building.

“I started shouting, ‘No!’ to stop them from coming in,” Filipova, the group’s project coordinator, told local news. “He hit me and just kept coming. Everyone else followed him in.”

The group was having a gathering for the trans community when the attack happened.

“They just started throwing and breaking things, destroying kitchen cabinets, while shouting that we were corrupting children,” said Filipova.

“He stopped in front of me, and that scared me because he had already hit me once and I didn’t know if he would strike me again,” Filipova said. “I told him they had done their job and could leave. He said, ‘No, I still have one more job,’ and pulled out a knife.”

“Luckily, he didn’t use it to harm any of us,” Filipova said.

After prosecutors investigated and enough evidence had been collected to charge him with “acts that grossly violate public order,” the country’s Central Election Commission lifted the immunity he had as a presidential candidate.

“The crimes committed stand out with their extreme audacity and disrespect for the democratic foundations of the state,” prosecutors said in a statement.

The attack has been condemned worldwide, with ambassadors from several countries making statements and going to the center personally to offer support and “express solidarity with our friends and partners in the face of this senseless attack.”

“LGBTQI+ rights are basic human rights, and like many Bulgarians we reject violence and intolerance, which have no place in any democratic society.”