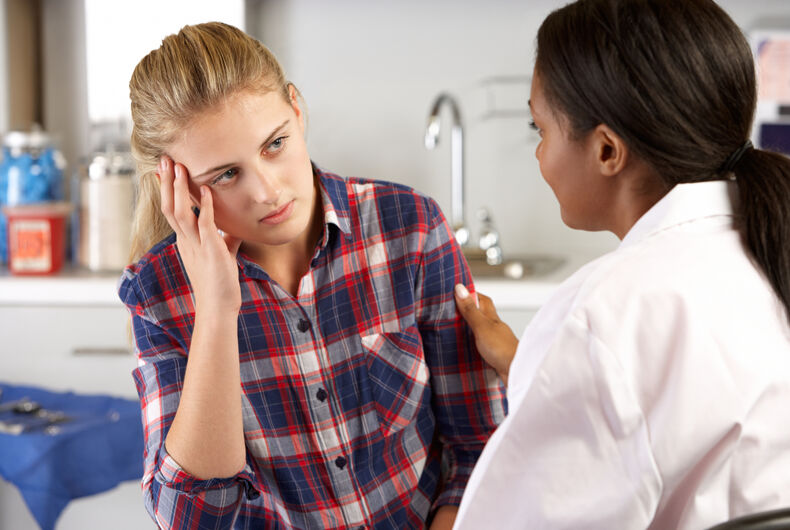 Gay, lesbian, and bisexual teenagers are less likely to talk about their health care needs and have them met, a new study found.

Researchers at Boston Children’s Hospital and several other institutions looked at data from public school students in Houston, LA, and Birmingham, Alabama, which included 3616 straight and 640 LGB teenagers.

Related: Why won’t this couple’s health insurance give them the same benefits as a straight couple?

They found that both groups of teens’ parents were about as likely to say that their kids weren’t delaying necessary health care. But the queer teens were over twice as likely to say that a “serious” health concern went untreated in the previous year – 8.3% of LGB teens instead of 3.7% of straight teens.

More LGB teens (42.4%) said that they missed a routine check-up or getting needed care for an illness than straight teens (30.2%).

Queer teens were more likely to want to see a doctor for STIs, contraception, and substance use compared to straight teens, but they were also more likely to say that they avoid talking about certain topics with medical professionals (15.3% vs. 9.4%) because they’re embarrassed or worried that their parents will find out.

“LGB teenagers had more unmet health needs, less chances to seek needed care, and greater difficulty discussing any concerns with their clinicians than peers who were non-LGB,” the authors wrote in the study that was published in JAMA Network Open.

The authors note that queer people in general face certain health problems more than straight people, including STIs, mental health issues, substance abuse, eating disorders, and chronic pain. They are at higher risk for cancer and heart disease. The disparities, thought to be linked to minority stress, start to be noticeable in adolescence.

“Health care unitarization patterns, such as avoidance of or delay in seeking care, reduced access to health care, and difficulties communicating with clinicians, contribute to inequitable U.S. health care outcomes,” they wrote.

Previous research, the authors say, has shown that LGB adults are less likely to have their health care needs met because of less access to insurance, lack of queer cultural competence from medical professionals, and fear of outing themselves to care providers.

The authors suggest that doctors look up minor consent laws in their states that describe treatment that can be provided without parental notification so that they can tell queer teens how much they can keep confidential.

They also recommend doctors ask teens about their sexual identities to show that they’re willing to talk about it, which is something the American Medical Association and the American Academy of Pediatrics recommend as well.

“Given the power dynamic of a patient-clinician interaction and the perceived risk of stigmatization during the medical encounter, adolescents may not feel comfortable discussing their sexual orientation with a clinician,” the researchers wrote. “Because of this, it is essential that pediatricians have the knowledge and skills needed to initiate these conversations and establish a trusting relationship with their adolescent patients to provide them with needed care.”