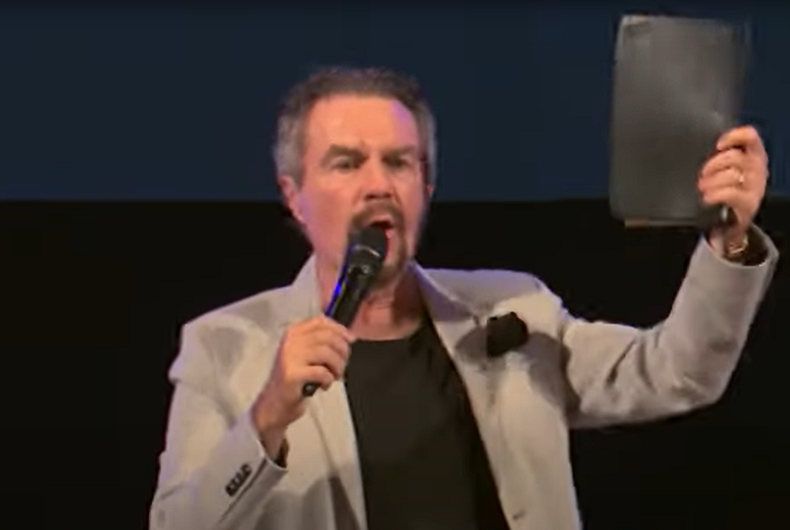 Televangelist Marcus Lamb – who once compared LGBTQ people to “drug addicts and shoplifters” – passed away earlier today after weeks in the hospital for COVID-19. Now his son is saying that his father’s death is “a spiritual attack from the enemy.”

Lamb, who was 64, passed away early this morning, his wife Joni Lamb announced in a broadcast today. He had tested positive for COVID-19 after over a year of his network’s anti-vaccine advocacy.

“There’s no doubt in my mind that this is a spiritual attack from the enemy,” his son Jonathan said about Lamb’s illness on a November 23 Ministry Now show. “As much as my parents have gone on here to kind of inform everyone about everything going on to the pandemic and some of the ways to treat COVID — there’s no doubt that the enemy is not happy about that.”

Lamb was the CEO of Daystar Television Network, one of the largest Christian broadcasters in the U.S. The channel regularly hosted anti-vaccine activists, including Sherri Tenpenny, who believes that vaccines make people magnetic.

She was on the network multiple times, along with other anti-vaccine activists like Ryan Cole, who promoted the anti-parasite medication Ivermectin as a cure for COVID-19. He also claimed that “thousands of patients, weeks after the shot [of a COVID-19 vaccine], we are seeing stage 3 or 4 cancer.” That is not true and also cancer is usually in a person’s body for over a year or several years before it can be diagnosed.

Daystar’s website still has a page about vaccines that says that they could be “the most dangerous thing your child could face in life” and that there are “very few safety protocols and a growing number of vaccine-related injuries.” These statements are not true and the vaccines authorized in the U.S. have been thoroughly tested and found to be safe and effective.

While this programming puts viewers in danger, Marcus and Joni Lamb reportedly lived pretty well. Daystar purchased a private jet with millions of dollars it got from the Paycheck Protection Program, government funds that were intended to help businesses pay their employees during the pandemic. Lamb and his family posted pictures of themselves taking vacations with the jet during the pandemic.

His family’s fortune caused him some problems, though. Years after an extramarital affair, three people tried to extort the Lambs and demanded $7.5 million to keep quiet about it in 2019.

Lamb instead talked about the affair on his network and promised that he was “not going to take God’s money to keep from being humiliated.”

“He had one inappropriate period of misbehavior with one person, and it wasn’t a man,” his therapist said in a bizarre statement, stressing that the affair wasn’t that bad because it was heterosexual. “It wasn’t a transvestite. It was with a woman.”

“I think this was a direct attack from the devil,” the Christian counselor said.

And once again people around Lamb are blaming the consequences of his actions on the devil.

“The enemy” is “doing everything he can to take down my Dad,” Jonathan Lamb said.

Lamb was not vaccinated, over the age of 60, and diabetic. He got the virus and had to be hospitalized by November 12 for “dangerously low” oxygen levels, according to a friend’s social media post. His wife said that he tried alternative treatments that they promote on their channel but that he was not able to recover. She said that she “breezed through COVID” with the same treatments, according to the Religion News Service.

“This morning at 4 a.m. the president and founder of Daystar and the love of my life went to be with Jesus,” Joni Lamb said this morning. “I wanted you to hear from me that he’s with the Lord.”

Daystar has still not acknowledged that Lamb had COVID-19, instead saying in a brief statement that he “went home to be with the Lord this morning” and for people to respect his family’s privacy.

In addition to anti-vaccine quackery, Daystar also promoted conversion therapy quackery, talking with “former gay and lesbian guests” who learned “the importance of discovering wholeness in Jesus Christ” on one show.

Joni Lamb helped promote Gay Awareness, a book that “exposes false teaching and deception that have created a false identity through the lens of sexuality instead of the eyes of God’s Word.” The book’s promotional materials say it was tested by “a focus group made up of individuals struggling with same sex attraction” who allegedly loved it.

Marcus Lamb has also expressed anti-LGBTQ sentiment himself. He had a conservative activist on his show in 2007 who opposed LGBTQ-inclusive hate crimes legislation and called it an attempt to “overthrow the nation” and “close down every church in America.”

“What’s next?” Lamb replied. “A hate crimes bill for drug addicts and shoplifters?”

Dr. Oz is running for Senate as a Pennsylvania Republican. He lives in New Jersey.