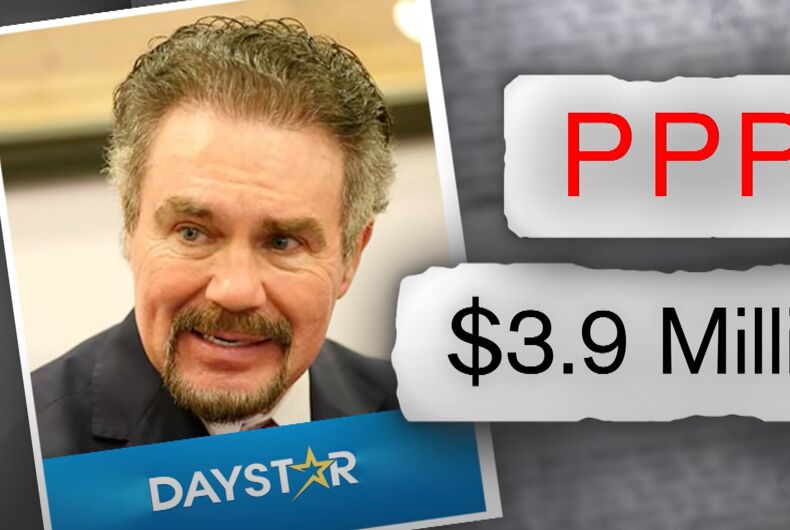 Marcus Lamb, the co-founder of Daystar Television, one of the nation’s largest religious broadcasters, is in hot water after it was discovered that his church took COVID bailout funds and turned around and bought a private jet.

This isn’t the first time the network has been forced to make flimsy excuses for Lamb. In 2010, after being caught having an affair, the church felt obliged to point out that his tryst wasn’t with a man or “a transvestite.”

After being exposed, the ministry returned the money and made excuses for why the controversial preacher was flying all over the country for family vacations.

Lamb and his wife, Joni, have a history of making anti-LGBTQ comments on-air and in personal appearances. When Duck Dynasty was canceled after star Phil Robertson’s started slurring LGBTQ people, the network quickly offered the family a primetime show. They were turned down.

Two weeks after being approved for a $3.9 million loan from the government’s Paycheck Protection Program (PPP), Daystar purchased a multi-million dollar Gulfstream V jet. They say they sold their old jet and used funds from another investment to purchase the aircraft and it will only be used for official business.

Lamb and his family have traveled all over the country in the jet, including posting photos of their “family beach vacation” to social media. Lamb and the church declared that it was a “working vacation.”

In 2010, after announcing that Lamb had an extramarital affair and claiming they were being blackmailed, the couple’s marriage therapist issued a bizarre statement through the church.

“He had one inappropriate period of misbehavior with one person, and it wasn’t a man. It wasn’t a transvestite. It was with a woman,” he said.

Joni Lamb has claimed “thousands” of people “have come out of homosexuality” and “may be the most discriminated people in the world today.” She has also claimed homosexuality is “ungodly” and “God cannot bless you and you cannot fulfill your destiny while you are operating within the realm of homosexuality.”