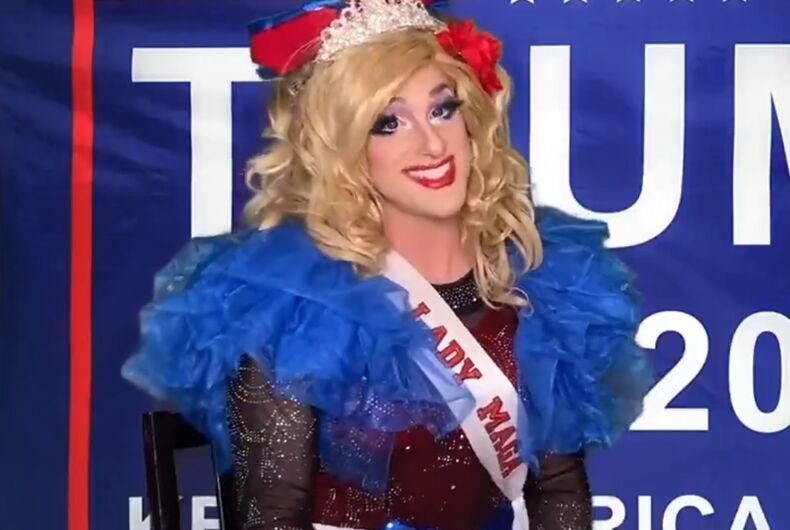 A far-right drag queen was heckled this weekend as she was speaking at the Million MAGA March in D.C. in protest of last month’s elections that Joe Biden won.

Lady Maga spoke at the rally in support of the Proud Boys, a neo-fascist and white nationalist group that encourages its members to engage in violence against the left. The rally was also attended by the “Groyper Army,” a loose group of white nationalists associated with Nick Fuentes and Michelle Malkin. This is the second Million MAGA March – the first was held last month.

Of course, no one in the video is wearing a mask or respecting social distancing.

Lady Maga tweeted that coverage of the “shame” chanting was “irresponsible journalism” because she believes it was the Groyper Army and not the Proud Boys who were chanting. She did not explain how she could tell, but she did not deny that many people at the rally were chanting “shame” at her.

“Proud Boys had nothing to do with Tiny Tim [Nick Fuentes] and his small group of groypers,” she wrote. “The obnoxious haters are not a reflection of us.”

I love my #maga family.
The obnoxious haters are not a reflection of us. pic.twitter.com/0j9p8p85hu

Despite the Lady Maga’s protests, Fuentes had more than a “small” group of followers at the march, where he also spoke.

“In the first Million MAGA march, we promised that if the GOP did not do everything within their power to keep Trump in office then we would destroy the GOP,” Fuentes said at the event. “As we gather here in Washington D.C. for a second MAGA March, we’re done making promises. It has to happen now: We are going to destroy the GOP.”

Lady Maga is the drag persona of Ryan Woods. Earlier this month, Woods posted a video of himself calling a school and telling the school not to fly the rainbow flag or the Black Lives Matter flag.

“I’m gay,” Woods says in the video, “but I don’t think that a rainbow flag is an appropriate flag to fly outside of an American elementary school.” He added that the rainbow flag is “leftist political radicalism.”

When you see leftism being pushed at a school or business
👏🏻CLAP👏🏻BACK!
Phone calls, emails, letters and reviews matter.@RoseParkElem is flying #BlackLivesMatter and #trans flags.
My friend’s kid can’t wear his #maga hat but this is ok? NOPE!@SLCgov @slcmayor
RT! pic.twitter.com/jyHcVakG56

An anti-LGBTQ extremist now heads the prestigious Voice of America

Anti-LGBTQ pastor’s church gets $4M in COVID bailout funds. They bought him a private jet.