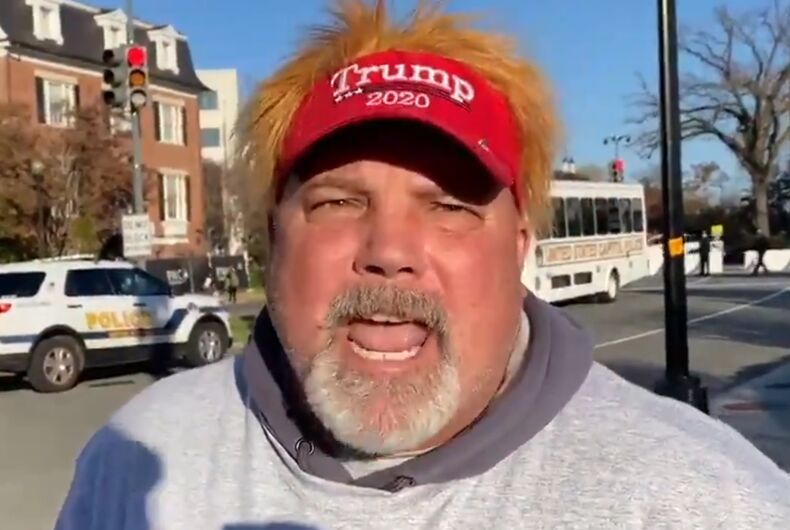 A Donald Trump supporter shouted anti-gay slurs at counterprotesters at the “Million MAGA March” in D.C. this weekend. Two gay men helped organize and participated in the weekend’s activities.

Related: Trump is now repeatedly tweeting that he “WON THE ELECTION” after accidentally admitting he lost

The man was wearing a red “Make America Great Again” cap with orange hair attached – a reference to Trump’s famous hairstyle – and a T-shirt that said “Legal votes matter,” a reference to conspiracy theories that say that Joe Biden won the election because of massive voter fraud, a claim that have been repeatedly debunked by the media, government officials, and the courts.

Trump supporters from around the country went to D.C. this weekend to express their belief that the election results will somehow change as a result of the Trump campaign’s lawsuits, further counting of ballots, or… really anything.

“I want this nightmare to end,” Florida resident and Million MAGA March attendee Craig Johnson told the Guardian. “I haven’t slept much since the election because I’m sad that Donald Trump is not our president. He’s gonna be our president though.”

Journalist Chuck Modi talked to the man shouting anti-gay slurs at the march about George Floyd, the unarmed Black man in Minneapolis who was killed earlier this year by police officer Derek Chauvin who kneeled on his neck for almost nine full minutes, even as he said he couldn’t breathe.

“They should have done it fucking longer,” the man said about the cop kneeling on Floyd’s neck.

Asked him about George Floyd murder. His answer is beyond vile so consider this a trigger warning. He said it 4 times.

Far-right hate groups – including the fascist organization Proud Boys – attended the Million MAGA March along with Trump voters, leading to violence between marchers and counterprotesters.

Despite its name, it’s estimated that several thousand – not one million – people attended the protest.