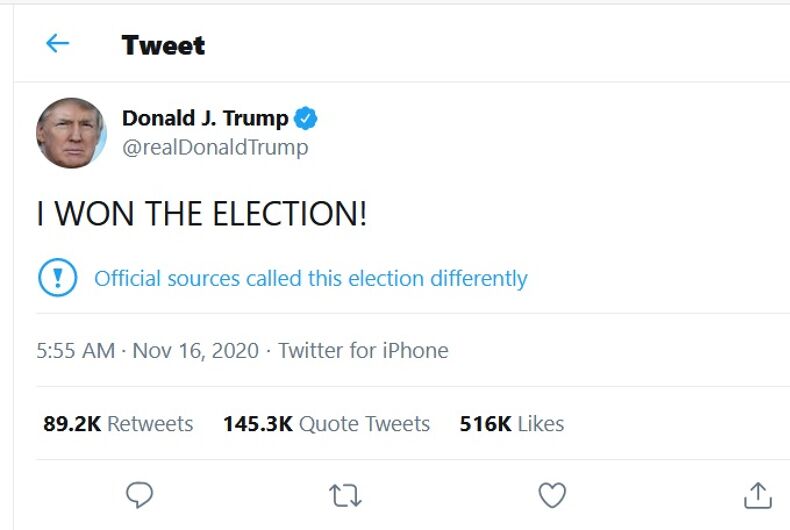 Donald Trump claims he won the election even though it has been called for Joe BidenPhoto: Twitter screenshot

Donald Trump is still refusing to concede to Joe Biden, nearly two weeks after the presidential election and all major media organizations have called the election for Biden.

“I WON THE ELECTION!” he tweeted in all-caps. Twitter put a warning on his tweet: “Official sources called this election differently.”

I WON THE ELECTION!

Trump sent the tweet just before midnight on Sunday, after a day of tweeting about the election and promoting conspiracy theories that Biden stole the election, which the New York Times projects he’ll win with 306 electoral votes to Trump’s 232.

“He won because the Election was Rigged [sic],” he tweeted earlier on Sunday.

“NO VOTE WATCHERS OR OBSERVERS allowed, vote tabulated by a Radical Left privately owned company, Dominion, with a bad reputation & bum equipment that couldn’t even qualify for Texas (which I won by a lot!),” he continued.

Republican observers were allowed in the battleground states of Pennsylvania and Michigan, and there is no evidence that Dominion Voting Systems is a “Radical Left” company or that they deleted votes for Trump (as the online conspiracy theory states). Even the Trump administration’s own Cybersecurity and Infrastructure Security Agency called the 2020 elections “the most secure in American history.”

He won because the Election was Rigged. NO VOTE WATCHERS OR OBSERVERS allowed, vote tabulated by a Radical Left privately owned company, Dominion, with a bad reputation & bum equipment that couldn’t even qualify for Texas (which I won by a lot!), the Fake & Silent Media, & more! https://t.co/Exb3C1mAPg

Still, some people thought that Trump’s first words – that Biden “won” – were the start of a concession.

Early this morning, Trump is up and tweeting that the election was the “Most fraudulent Election in history!” Twitter again put a warning on his tweet.

Most fraudulent Election in history! https://t.co/X2pRkTqWIS

And just as this article is about to be published, Trump tweeted again that he “won the Election!” And Twitter continued with its warnings.

I won the Election!

Donald Trump still refuses to concede. His petulance only amplifies his impending demise.