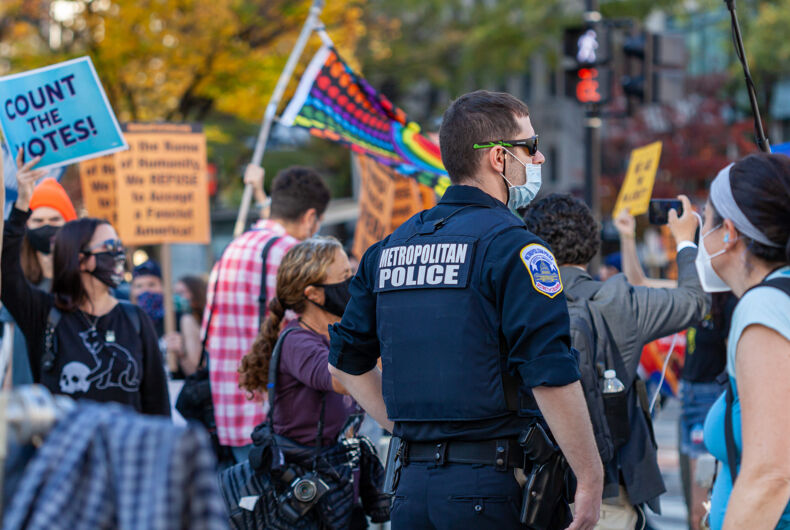 Protestors rally in Black Lives Matter Plaza outside of the White House on Oct 6, 2020.Photo: Shutterstock

Gay Republicans will join the rally in Washington, DC to protest the results of the 2020 election. Several far-right groups have pledged support for the event, including white nationalists, militia groups, QAnon believer, and neo-Nazis.

And two gay activists are helping to lead the weekend events.

Related: Gay Republicans really are self-loathing according to science

Brandon Straka, a hairdresser who founded the “Walk Away” movement meant to convince LGBTQ people to abandon the Democratic Party, will co-host a Sunday morning “Rescue America” rally with other third-rate Twitter activists and pundits.

Scott Presler, another gay man who has made a name for himself online with his rabid support for President Donald Trump, will speak at the main event on Saturday.

The gathering of the “disparate tribes of MAGA Nation” will consist of “Oath Keepers, Three Percenters, Infowars fanatics, Groypers, Proud Boys, white nationalists, neo-Nazis and the people who would simply call themselves die-hard MAGA” according to Politico.

The rally has several names depending on the group promoting it. White House spokesperson Kayleigh McEnany told reporters she thinks “it’s going to be quite large, um, from what I’m hearing.”

Large events planned to support the president have frequently petered out with lower than expected attendance.

The far-right is supporting Trump’s decision not to concede the election to President-elect Joe Biden, using laughable claims of voter fraud as his excuse. The “MAGA Nation” has echoed his claims along with other prominent Republican politicians, despite overwhelming evidence that no fraud happened.

See you all this Saturday at the Freedom Plaza at noon. #StopTheSteal pic.twitter.com/EMEyKPKrXD