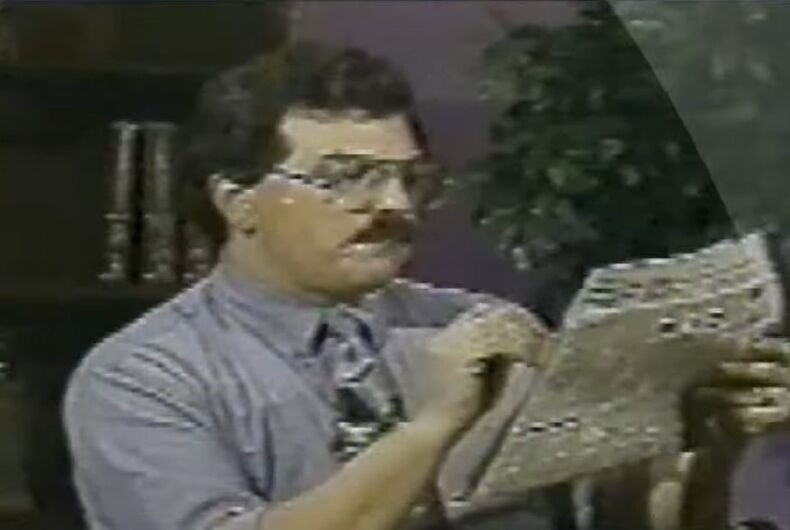 Bob Enyart reading a newspaper during a Jan 9, 1995 broadcast.Photo: screenshot

A Christian radio and TV host who was known for mocking people who died of AIDS has died of COVID-19 at age 62. Denver Bible Church pastor Bob Enyart made local headlines last year when he sued his state over its mask mandate and then this year when he called for a boycott of the COVID-19 vaccines.

A pastor at the Denver Bible Church, Enyart made the families of people who died of AIDS angry in the 1990s when he would “gleefully” read their obituaries on his  show, Bob Enyart Live, and call them “sodomites.” He would then play “Another One Bites the Dudes” by Queen.

“Listen to the words of the song and you’ll understand why I did it,” he told Westword when asked why he made fun of the dead.

But now he’s the one who is dead. Both Bob Enyart and his wife Cheryl Enyart contracted COVID-19 recently and tested positive two weeks ago.

Neither of them were vaccinated. According to his website, they refused to get vaccinated against COVID-19 because, he said, the authorized vaccines were all “tested… on the cells of aborted babies.” (This is not true – they were tested on cells grown in a lab from established cell lines that, years ago, originated from fetal cells, just like many other medications are.)

“So while it is not inherently sinful to take an immorally-developed vaccine,” Enyart wrote, “we urge everyone to boycott Pfizer, Moderna and the Johnson to further increase social tension and put pressure on the child killers.”

“Bob Enyart was one of the smartest, and without question the wisest person I’ve known,” he said, not discussing Enyart’s illness.

Last year, Enyart filed a federal suit against the state of Colorado to keep parishioners in his church from having to wear masks to services. And he won; a federal judge appointed by Donald Trump issued an injunction lifting parts of the state’s mask mandate.

“Because we human beings are made in God’s image and God’s likeness, we have not only a right but an obligation to worship Our Creator, and we should be able to do that without government interference,” he said at the time. “And so we’re thankful that this federal court recognized our right to worship.”

Enyart’s mocking of people who died from AIDS was just one of his many attacks on LGBTQ people over the decades he spent in radio and television. He hated gay people so much that he has maintained a bizarre list of serial killers he claimed are gay, which includes the Pulse shooter Omar Mateen, who never identified as gay or bi, was never confirmed to have had relations with a man, was married to a woman, and killed 49 people at an LGBTQ club.

He included the Holocaust on the list, falsely stating that there was “extensive, carefully documented evidence… that many of those running Nazi Germany, including Hitler, were homosexuals.”

Enyart mocked LGBTQ people by saying that he “came out” as homophobic in 1989: “I feared my family and friends might reject me for coming out. Most of them, though, are supportive. I explained to them that I was born this way. I am homophobic.”

“For example, if I eat a big meal and then see one man glance romantically into another man’s eyes and then they kiss, I will lose my lunch,” he said in a 2001 interview. “I will vomit. It grosses me out.”

He believed in the death penalty for male homosexuality and claimed that Texas schools encouraged students “to have homosexual sex.”

Enyart was also a strong opponent of women’s rights, arguing that women who get abortions should receive the death penalty. He protested reproductive health clinics and even led protests at the homes of executives of a construction company that was doing some work for Planned Parenthood, saying that they were helping with “child killing.”

Enyart was convicted of beating Cheryl’s seven-year-old son in 1994 so hard with a belt that he broke the child’s skin. He was sentenced to 60 days in prison in 1999 and later married Cheryl, which made his victim his step-son. He remained a strong proponent of spanking children, saying that kids’ “hearts are lifted” when they’re hit.

He was sent back to prison in 2009 for trespassing while protesting the Christian conservative organization Focus on the Family for not being anti-abortion enough.

Despite his extreme views, he made several appearances on Bill Maher’s Politically Incorrect.