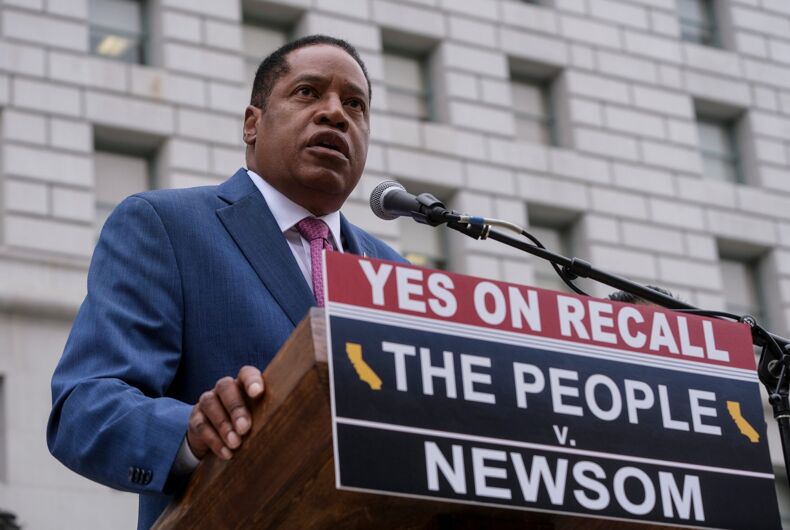 Right-wing media outlets are already laying the groundwork to claim that “voter fraud” has rigged tomorrow’s recall election in California against Republicans.

While their claims may actually discourage Republicans from voting, they’ll also harm people’s trust in the democratic process. The distrust could drive Republicans to restrict voting rights elsewhere or commit political violence to stop future instances of “fraud.”

Related: Republicans are poising themselves to win regardless of the outcome in California’s recall

The right-wing watchdog organization Media Matters has found that right-wing outlets have distorted recent news stories to suggest that a vast conspiracy of fraudsters will use ballot theft and fake ballots in favor of Gov. Gavin Newsom (D).

Richard Grenell, the out former U.S. ambassador to Germany under President Donald Trump (R) and former Fox News contributor, claimed in a video he posted online that holes in some mail-in voting envelopes will allow election officials to detect anti-Newsom votes before the envelopes are even open. This would allow officials to trash the votes rather than counting them, in theory.

The holes are actually a tactile method for helping visually impaired voters locate the ballot envelope’s signature line, Media Matters found, and each county designs its own envelopes for mail-in ballots, so the holes’ existence isn’t proof of widespread fraud. That hasn’t stopped right-wing media pundits such as the Daily Wire‘s Michael Knowles from claiming it as proof of a ballot-trashing conspiracy.

Newsmax host Grant Stinchfield was among conservatives claiming that California’s Remote Access Vote-by-Mail system will allow people to print off multiple ballots from their homes. In reality, the system is only used by a very limited number of disabled voters.

It also only allows those voters to print a single ballot. That mail-in ballot is then checked against a system-generated document that verifies the person’s singular vote.

The right-wing website RedState has falsely claimed that Democrats deliberately came up with the system to cheat on elections. One America News (OAN) Network host Natalie Harp also suggested that the state may allow too many voters to qualify as “disabled.”

Echoing this, Donald Trump said in a recent Newsmax interview that the California election is “probably rigged.”

“In many places, like California, the same person votes many times — you’ve probably heard about that,” he claimed.

However, none of them mentioned that the security officials’ advisement was because pro-Trump conspiracy theorist Mike Lindell released unauthorized system images and details about California’s voting machines in his fruitless August “cyber symposium” that was supposed to prove voter fraud in the 2020 presidential election.

Elder himself, the recall election’s Republican frontrunner, has claimed that “there might very well be shenanigans” in the election. Fox News hostess Tomi Lahren also said that “the only thing that will save Gavin Newsom is voter fraud.”

In reality, California is largely Democrat and Newsom is highly favored to win the recall election as long as Democrats show up to vote. CNN reports that “it would take one of the largest polling misses in the last 23 years for [Newsom] to be recalled on Tuesday.”