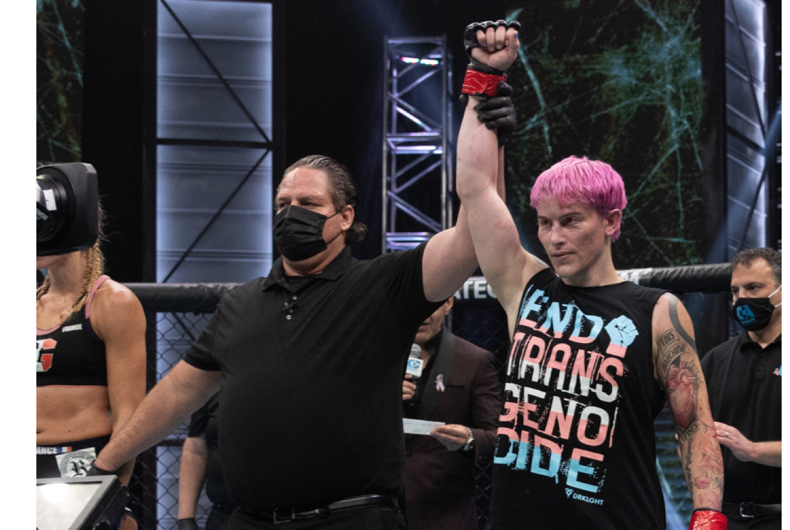 Alana McLaughlin (right) being declared the victory by knockout after the second round of her bout with Celine Provost.Photo: Screenshot/Combate Global

Alana McLaughlin not only made her debut in professional mixed martial arts (MMA) competition on September 10, but won against Céline Provost in the competition held in Miami Gardens, Florida and broadcast worldwide.

McLaughlin is the second transgender woman to compete in pro MMA competition in the United States, following in the footsteps of her mentor and friend, Fallon Fox.

In a match under international MMA franchise Combate Global, McLaughlin earned a knock out by submission in the second round of the fight. While quick, the fight was heavily contested, with Provost gaining an advantage against McLaughlin in the first round.

McLaughlin began battling back, and in the second round, used a rear-naked choke hold to gain victory, according to ESPN.

Her success has earned her condemnation from anti-trans commentators, many who are advocating for the exclusion of trans people in sports around the country based on their gender identity. Currently, six states have laws in place instituting such a ban in school-based athletics programs, including in Florida, where the fight took place.

This is despite the fact that the match’s organizers deemed the fight fair and that Provost herself repeatedly made clear she had no issue competing against a trans woman. McLaughlin also passed all medical rules in place by the Florida State Boxing Commission, and had no testosterone detectable in her body.

After the fight, McLaughlin reacted to the vitriol online.

Good morning, friends, supporters and others! I'm getting a lot of variations of the same nasty messages calling me a cheater like I didn't just get beat on for a round and a half. Y'all need to show Céline Provost some respect and take your concern trolling elsewhere. (1/2) pic.twitter.com/GFhk55YeJm

She almost finished me more than once, and on scorecards she definitely won that first round. This is the only post I'll make about this. Transphobes are just making my block hand stronger.🤷‍♀️ (2/2)#ladyferal #girlslikeus #hardfemme #girlswhofight #transathletes #transathlete

Still, her victory is being celebrated by many around the world, as more trans athletes from the world try to fight for more acceptance and inclusion in the sports they love.

Fallon Fox, who came out as transgender in 2013 in an interview with Outsports, faced an even less enthusiastic welcome while trying to compete professionally.

Several people in the United Fighting Championship (UFC), considered the premier MMA league in the country, vocally stood against her, including then color commentator Joe Rogan. Despite saying they consider themselves allies to the LGBTQ community, UFC President Dana White said he believed that it would be unfair for trans women to compete as women, and Fox never participated in the organization.

She continued to compete in MMA fights, taking part in the Xtreme Fighting Organization and losing in a title fight in 2014. Still, despite her record of 5-1, and the fact that she hasn’t fought professionally since 2014, Fox is constantly attacked and berated from the likes of Donald Trump, Jr., among other anti-trans advocates.

McLaughlin is a 38-year-old former U.S. Army Special Forces veteran who served in the war on Afghanistan and survived years of sexual abuse and rejection from her family, as detailed in the Guardian.

She entered the match with a trans flag draped over her, and was declared victor after the match while wearing an “End Trans Genocide” shirt.

“It was a nightmare trying to find an opponent,” McLaughlin said prior to the bout, “I have nothing but respect for [Provost].”

Combate Global has said that the bout is “monumental not only in MMA but for sports in general.”

Provost, for her part, told the Guardian, “I train with men that are stronger than me all of the time. It doesn’t bother me at all. We need to show that MMA is an inclusive sport.”

Provost is a schoolteacher from France, where MMA is now illegal, and has trained professionally in the sport for 10 years, outside of preparing to compete in boxing as well.

In the meantime, McLaughlin is taking every opportunity to honor Fox for paving the way for her.

“Right now, I’m following in Fallon’s footsteps,” she told Outsports in a prior interview. “I’m just another step along the way and it’s my great hope that there are more to follow behind me.”

Replays of the match between McLaughlin and Provost can now be watched on Paramount+, Facebook Live, Univision, and the network TUDN.

This is literally true. I have no detectable testosterone in my body. Less than 2 nanograms per deciliter. https://t.co/C9yeox8LS9