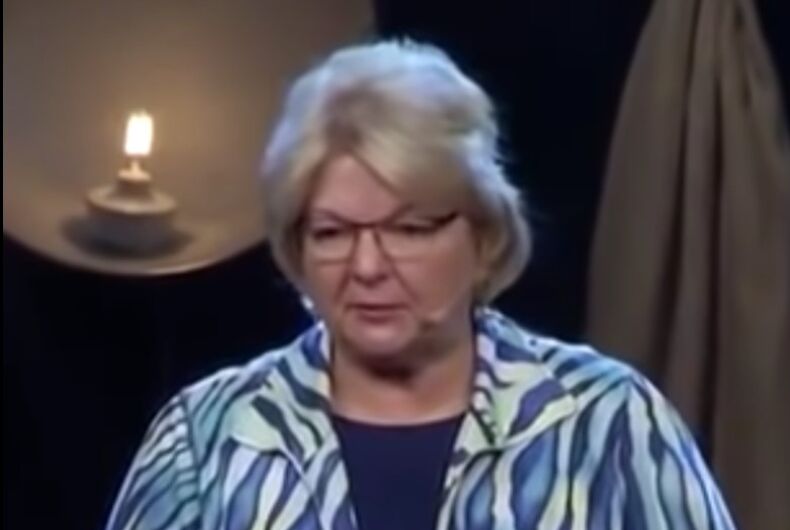 An anti-LGBTQ doctor testified before the Ohio state legislature and claimed that the COVID-19 vaccines make people magnetic and that she has seen people who were vaccinated “put a key on their forehead” and “it sticks.”

Sherri Tenpenny, D.O., is a popular internet personality and conspiracy theorist who has long opposed vaccines – she authored four books of anti-vaxx theories and even claimed “pro-vaccine extremists” forced her to cancel a 2015 speaking tour in Australia. This past year, she has focused on mask mandates and the COVID-19 vaccines.

Related: Ivanka Trump enraged Republicans by getting the COVID vaccine

On Tuesday, she testified in Ohio in favor of a law that would ban businesses, colleges, and daycare centers from requiring a COVID-19 vaccine from customers, students, and employees, even if that puts people’s lives in danger.

“I’m sure you’ve seen the pictures all over the internet of people who have had these shots and now they’re magnetized,” Tenpenny told the Ohio House Health Committee. “They can put a key on their forehead. It sticks. They can put spoons and forks all over them and they can stick, because now we think that there’s a metal piece to that.”

She also said that the vaccine has an “interface” with 5G cell phone network. She did not explain how mRNA in a syringe could have an interface with a cell phone tower.

“There’s been people who have long suspected that there’s been some sort of an interface, ‘yet to be defined’ interface, between what’s being injected in these shots and all of the 5G towers.”

Tenpenny’s testimony is false. The vaccines do not have microchips and they do not interact with cell phone towers.

Online videos of people becoming “magnetic” after getting the vaccine have also been debunked – people making the videos either had oily skin that small objects stuck to or they were using tape.

“Receiving a COVID-19 vaccine will not make you magnetic, including at the site of vaccination which is usually your arm,” the CDC said in a statement. “Metals such as iron, nickel, cobalt, lithium, and rare earth alloys, as well as any manufactured products such as microelectronics, electrodes, carbon nanotubes, and nanowire semiconductors” are not present in the vaccines.

“In addition, the typical dose for a COVID-19 vaccine is less than a milliliter, which is not enough to allow magnets to be attracted to your vaccination site even if the vaccine was filled with a magnetic metal.”

Tenpenny has been peddling COVID-19 conspiracy theories for the past year. A report named her Twitter account as one of the 12 where 65% of COVID-19 misinformation was passing through, including anti-mask and anti-vaccine claims.

Tenpenny has a history of anti-LGBTQ statements. Last year she said that a story about Pope Francis’s support for some LGBTQ rights showed who he “works for” and she has made jokes at the expense of transgender people’s identities.

Update: Someone else who testified at the hearing took Tenpenny’s theory seriously and decided to demonstrate it. It did not go as she intended.

Wow. An anti-vaccine nurse in Ohio tried to prove the Vaccines Cause Magnetism theory in an state legislative committee. The demonstration did not go to plan pic.twitter.com/0ubELst4E8