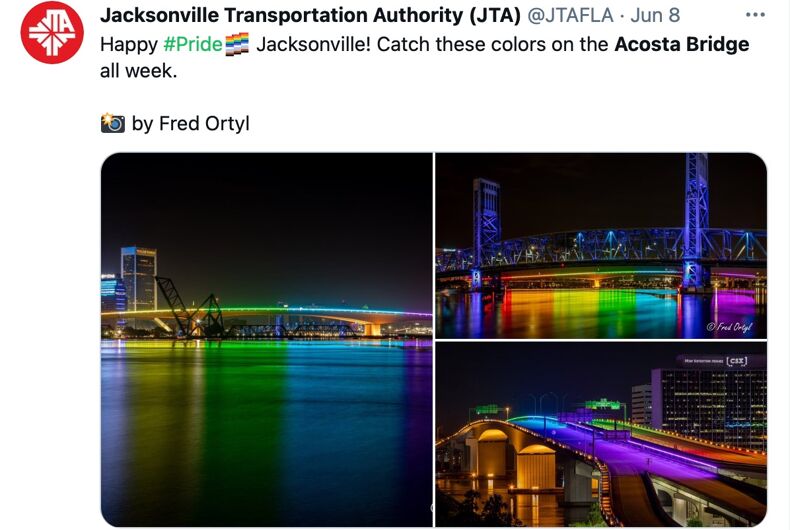 For a brief time, the Acosta Bridge was lit in rainbow colors before the Florida Transportation Authority ordered them shut off.Photo: Twitter

The Florida Department of Transportation (FDOT) has ordered the city of Jacksonville to stop lighting the Acosta Bridge in rainbow colors to celebrate Pride Month. The display was supposed to last for a week before FDOT pulled the plug.

Related: Florida man charged with “criminal transmission of HIV” after he spit on a paramedic

The Acosta Bridge is regularly lit up with color to honor sports teams, Breast Cancer Awareness Month, and other notable events or holidays – as is Sarasota’s bridge.

“This afternoon the FDOT informed the JTA that our scheduled color scheme for the Acosta Bridge is out of compliance with our existing permit. The JTA will comply accordingly,” according to a statement from the Jacksonville Transportation Authority released Tuesday night.

Hours later, the colors had been changed to all blue.

“The aesthetic lighting is owned and operated by JTA,” FDOT spokesman Hampton Ray told the Times-Union. “Since it is on a state structure, JTA must have a permit for that light. It is my understanding that a certain color palette is available on that permit, but specific questions about that permit and light, I would have to refer you to JTA.”

But FDOT’s bridge lighting policy stipulates that the department can refuse requests it deems offensive. But it also says that bridges can be lit to celebrate holidays and “events of broad community interest and significance approved by local governments.”

The same day the permit was denied, Gov. Ron DeSantis (R) signed legislation to ban transgender girls from playing school sports. The next day he slashed funding for LGBTQ issues from the state budget.

“It’s frustrating,” Sarasota Mayor Hagen Brody told the Sarasota Herald-Tribune. “I think the state is being a little rigid… I didn’t think this request would be anything controversial. It’s really surprising to get push back from the state.”

“Should LGBTQ Floridians give the benefit of the doubt or BELIEVE HIM when he shows us who he is?”

Hours after this tweet, Florida Gov. @RonDeSantisFL made the city of Jacksonville take down their rainbow colors on the Acosta Bridge.

Lemme get this STRAIGHT.@GovRonDeSantis’s @MyFDOT has ordered the #Pride2021 rainbow lights on a Jax bridge REMOVED?!?

Should LGBTQ Floridians give the benefit of the doubt or BELIEVE HIM when he shows us who he is?https://t.co/mkH07foS0n

Senate Republicans kill bill to fight discrimination in the workplace