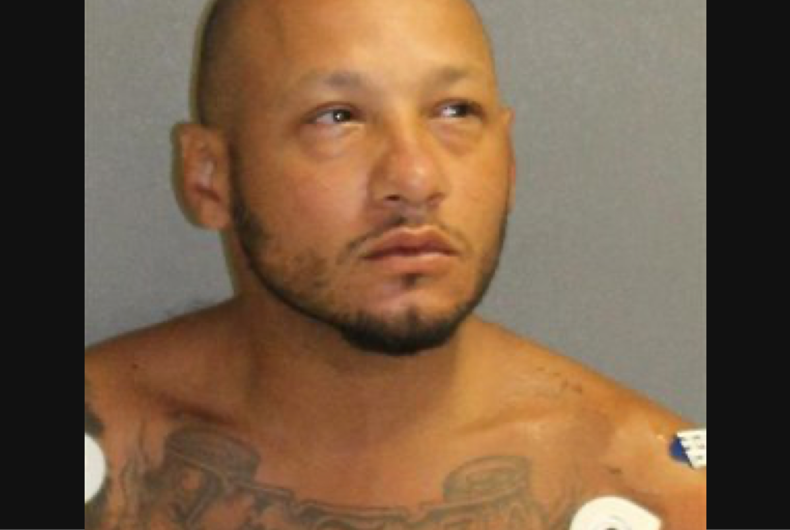 They claim that Rivera revealed he was HIV-positive before spitting at them numerous times and making death threats.

There is no evidence that HIV can be transmitted by saliva alone, according to the Centers for Disease Control and Prevention (CDC). Coming into contact with someone’s bodily fluids on your skin would also not transmit the virus, as the proteins in saliva prevent the virus from transmission.

Still, police booked Rivera on “criminal transmission of HIV” and several other charges in Florida law.

South Daytona City Police say they were called to investigate a domestic disturbance call on Tuesday at a home along South Palmetto Avenue. Officers arrived at a home that they believed belonged to Rivera’s girlfriend, where both were present. Rivera attempted to flee on a bicycle, and an officer followed in pursuit.

Upon catching him, the officer alleges that Rivera lied about his name and was in possession of ecstasy. At this point, Rivera is reported as revealing he has HIV and threatened the life of the officer.

While checking his vitals, Rivera allegedly spit on the arm of one of the fire department paramedics treating him. They reported that the spit was “brownish-red,” insinuating that blood was mixed with the saliva.

Even after a “spit hood” was placed over Rivera’s face, he allegedly continued to spit and threaten to transmit HIV to the personnel attending to him. He told a paramedic, “use them universal precautions, [expletive],” according to a report cited in the Daytona Beach News-Journal.

Rivera was arrested and booked into the Volusia County Branch Jail, where he was being held without bail as of Wednesday. In addition to attempted HIV transmission charges, South Daytona Police also charged Rivera with battery by way of spitting, domestic violence battery, resisting arrest “without violence,” evading police, giving a false name to police, unlawful possession of ecstasy, possession of drug paraphernalia, and grand theft.

Police claim that they “confirmed” that Rivera was HIV-positive with doctors at the Halifax Health Medical Center before charging him.

Florida is one of 25 states that currently has specific statutes that criminalizes “potentially” transmitting HIV, and one of 10 that specifically considers spitting such an act. According to the Williams Institute at the UCLA School of Law, the Sunshine State has four HIV-specific criminal laws that can be applied without “actual transmission of HIV or the intent.”

“All of them are broad enough to cover conduct that cannot, in fact, lead to transmission of the virus,” the Institute reported this March.