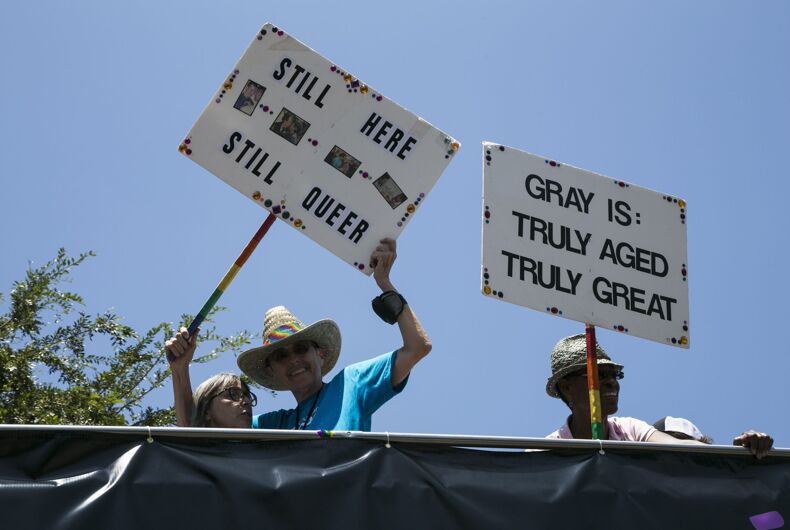 When it comes to understanding the LGBTQ community in order to support and defend it, one of the main challenges is getting good data.

Most of the data that we have comes from pollsters and can fluctuate wildly.

Related: What the U.S. Census means and why you should fill it out. Now.

Knowing just how large the community is (as well as its sub-groups) more than an academic exercise. That information helps shape policy, including the distribution of resources by the government. If you don’t know how many people you might help, how can you decide what your priorities should be?

Nowhere is that more true than when it comes to seniors.

While there are good resources available to them, they need more attention from the government and the medical profession. Unfortunately, their relative lack of visibility adds yet another barrier to having their needs addressed.

“More data – and more participation from LGBT people – is needed to understand the scope and diversity of our communities fully,” notes Services and Advocacy for GLBT Elders (SAGE).

Fortunately, there is a mechanism for correcting this issue, one that serves as a gold-standard source: the 2020 U.S. Census.

The Census still has its flaws. The biggest is that it only counts same-sex couples. There is no way for single people to identify as LGBTQ. A proposal to add a question about sexual identity to the 2020 Census was never implemented. Congress could require the question to be added to the next Census, but a bill to do just that, which was introduced in 2018 by Sen. Kamala Harris (D-CA) never advanced, killed by Republican opposition.

Still, the addition of same-sex couples is a start. Data from the Census informs decision-makers. Just as importantly, it puts a government stamp of approval on the legitimacy of our relationships in the era of marriage equality.

The Census is also important to LGBTQ elders for a variety of reasons. The Census will be used to draw Congressional districts, so an accurate count ensures that everyone is represented and resources are allocated fairly. The data is used for the next ten years to determine where to place parks, roads, and hospitals. It also determines funding for major projects, such as mass transit, to make communities more liveable.

One thing all seniors should be aware of is the unscrupulous individuals who use the Census to try to scam seniors. There are tips to follow to make sure you don’t fall prey to criminals to prey on seniors during the Census season.

The Census went out in March, largely as a request to fill it out online. If you haven’t gotten one already, you can always request a paper questionnaire. And there’s still plenty of time to respond. AARP has a handy step-by-step guide on how to respond to the Census.

For older LGBTQ Americans, there may still be some lingering reticence about telling the government about your sexual orientation. A lifetime of caution can cast a long shadow.

But the data from the Census is required by law to be strictly confidential. Given the importance of the information and the long-term effect on resources, now is time to make sure that your voice is fully counted.