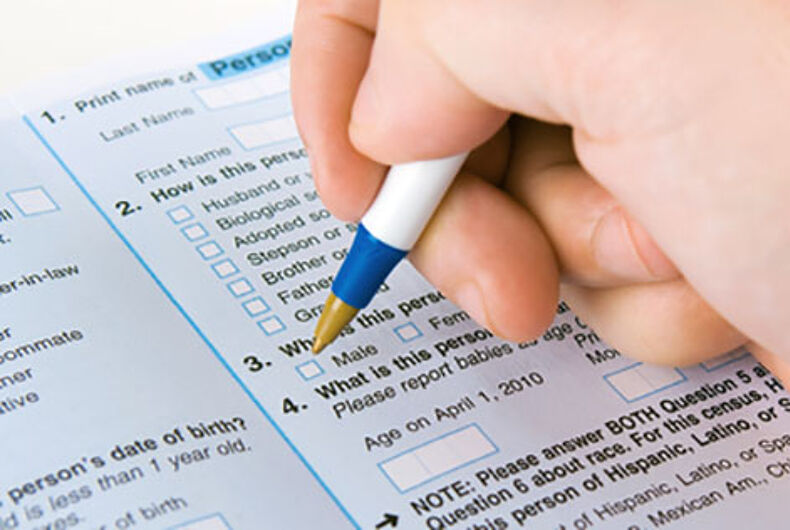 It’s been the hot topic in LGBTQ circles for a week now, and even prompted more than five-dozen Democrats in Congress to take action: the so-called “erasure” of lesbians, gays, bisexuals and transgender Americans by the U.S. Census Bureau. “So-called,” because a polling expert say it’s not true.

But that didn’t get in the way of advocates expressing outrage.

“By erasing LGBTQ Americans from the 2020 U.S. Census, the Trump Administration is adding a disgusting entry to a long list of tactics they’ve adopted to legally deny services and legitimacy to hard-working LGBTQ Americans,” GLAAD Executive Director Sara Kate Ellis said in a statement. The National LGBTQ Task Force produced a side-by-side graphic under the banner, “We’ve Been Erased!”

And the alarm sounded by these advocates sparked news reports here and elsewhere over the fact that there will be no questions about sexual orientation or gender identity in the next Census in 2020. One headline in the Daily Beast seemed to capture the mood most succinctly:

“This Is Why The Erasing of LGBT Americans On The 2020 Census Matters,” labeling what the government is doing “official prejudice.”

Then on Friday, Sen. Tammy Baldwin, Rep. Raul Grijalva of Arizona and Rep. Adam Schiff of California joined more than 50 colleagues in writing a letter to the Trump administration, urging the White House to reconsider counting how many queer people live in the United States.

But there is a small problem with all the clamor for accountability: an expert says it’s founded on a false premise.

“Erasing implies that the Bureau went from measuring sexual orientation and gender identity in the Census to eliminating that measurement,” demographer Gary Gates told LGBTQ Nation. “LGBT individuals have been invisible in past decennial Censuses and will remain invisible in 2020.  That should not be the case, but it’s not accurate to suggest that the Census Bureau ‘erased’ them.  They’ve never counted them in the first place.”

Gates should know. Until last year he had served five years on the Census Bureau’s Scientific Advisory Committee and was formerly a Distinguished Scholar and retired as Research Director at the Williams Institute, UCLA. But as he explained in an email, there is still something to be outraged about, given that those doing the counting said in a memo, “there was no federal data need” to add questions related to the LGBTQ community.

“There’s been a lot of confusion about this issue,” Gates told LGBTQ Nation. “The bottom line is that the decision to not measure sexual orientation and gender identity on Census 2020 was made long before Trump became President.”

“However, Census Bureau willingness to consider counting LGBT individuals on the annual American Community Survey (ACS), which would be the pre-cursor to inclusion on a future decennial Census, appears to have been affected by the change in administrations. Despite advice from the Departments of Justice, Health and Human Services, and Housing and Urban Development suggesting a strong federal need for better data on the LGBT population, the Bureau now argues that such need does not exist,” Gates continued.

“Their change of heart from at least considering LGBT inclusion in the ACS to now ruling it out offers evidence that the Census Bureau isn’t telling the whole story and may have let politics interfere with decisions about content.”

And of course, right wing tabloids like The New York Post are ignoring the facts related to the Census Bureau flip-flop and instead reveling in the community’s overreaction, with an editorial Sunday declaring, “Census ‘erasing’ LGBT community is fake news.”

“Don’t hold your breath waiting for a wave of corrections on this fake news,” wrote the Post editorial board. “Instead, get ready for the next outrage-that-really-isn’t.”

Nothing is worse than seeing the Post of all things get it right.