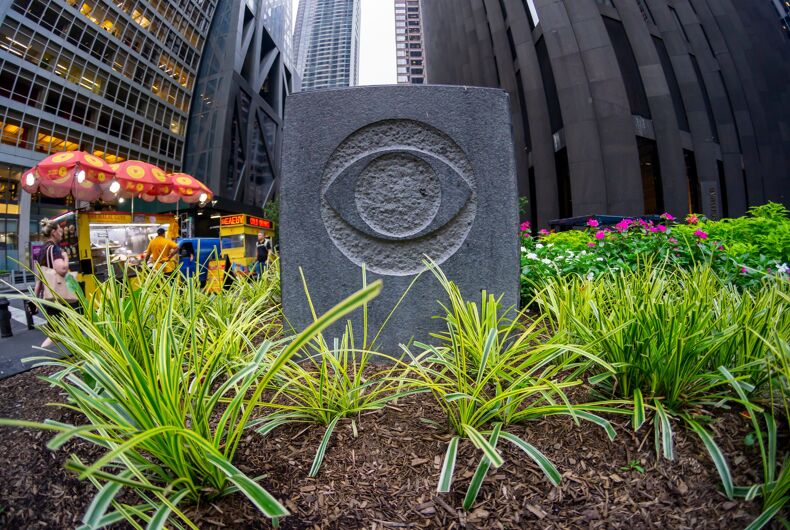 New York NY - A decorative element with the CBS logo outside of Black Rock, the CBS headquarters in New York, August 13, 2019.Photo: via Shutterstock.com

After publishing an erroneous report claiming a HIV-positive man had knowingly attempted to transmit the virus to someone, CBS announced the writer of the article and its social media posts will no longer work for them.

“This online story should not have been published. It does not meet our journalistic standards, nor does it reflect our core values,” The local New York branch of the company said in a statement to Gay City News.

Related: An HIV vaccine could be available in 2021 as experts are “optimistic” about trials

Their article revealed the name of a man that was arrested by the Port Authority of New York and New Jersey, and claimed that he “knowingly” had the HIV virus. If this information was accurate, that means they published the name and medical information of a HIV patient without permission, which is confidential. This information has been withheld by publications that subsequently covered the events.

The CBS article also relied solely on the Port Authority Police Benevolent Association, and President Paul Nunziato’s statements. They publish the Association’s claim – that the arrested man was trying to transmit his HIV virus by spitting on the police officers – as fact. All available scientific evidence shows that it is not possible to pass this virus through saliva.

“The person who wrote and published the story and social media post failed to review the copy with our news managers. This individual is no longer employed by CBS New York,” the network’s written statement reads.

The story was not only published on CBS New York‘s website, it was shared on Twitter at least twice, promoting the beliefs that HIV can be transmitted through saliva, and that it was being used as a ‘weapon’ on police. “RELEASED AFTER HIV ATTACK: A judge has let a suspect back onto the streets after police at LaGuardia say the attacker spit into an officer’s mouth knowing they had HIV,” the first tweet read, in part.

Additionally, the article had no byline, and the company has not named the employee behind the posts.

This led to ACT UP NY, Bailey House, Gay Men’s Health Crisis, Housing Works, and VOCAL-NY, among other organizations, staging a protest in response outside CBS’ New York headquarters on Friday.

Yesterday, HIV services organizations and activists held a rally in front of CBS headquarters to demand accountability from @CBSNewYork for publishing an article about an arrest that promoted misinformation about the transmission of HIV via saliva to stoke fear about bail reform. pic.twitter.com/5Xb8jqKPzg

The events that the article covered were the police’s arrest of the allegedly HIV-positive man “for stealing yogurt from a store” inside LaGuardia Airport. The police assert that the man resisted arrest, and in the struggle that he spit directly in the mouth of a Port Authority police officer. He subsequently faced additional charges against him, but under New York’s newly-enacted bail reforms, he was released on his own recognizance without supervision, rather than sit in jail for the duration of proceedings.

This angered the Police Benevolent Association, which prompted them to publicly disclose this information to CBS – which most likely violates privacy laws and internal police department regulations.

Over 50 AIDS activists stood boldly in front of @CBSNewYork to demand full accountability for their dangerous headline that weaponized people who live with HIV.

While CBS has since retracted the story, the Port Authority Police Benevolent Association has refused to retract or correct their claims, continuing to promote these factually baseless tropes about HIV-positive people.

In fact, as of publication, the Association was still sharing tweets from pro-police blogs that continued to frame the man as HIV-positive and trying to transmit HIV, with one story allegedly quoting NYPD officers and “Blue Lives Matter” spokespeople, although they have no direct knowledge of the case or relevance to the events.

HIV-Positive Suspect Who Spit In Cop's Mouth Released Without Bail https://t.co/OndR07YqR6 via @bluelivesmtr

Additionally, the Queens (NY) District Attorney’s Office would not confirm or deny if they plan to move forward with charges – they would not even rule out bringing harsher charges against the man, as the police have asked for.

NFL coach Katie Sowers wins this weekend, both on screen and sidelines