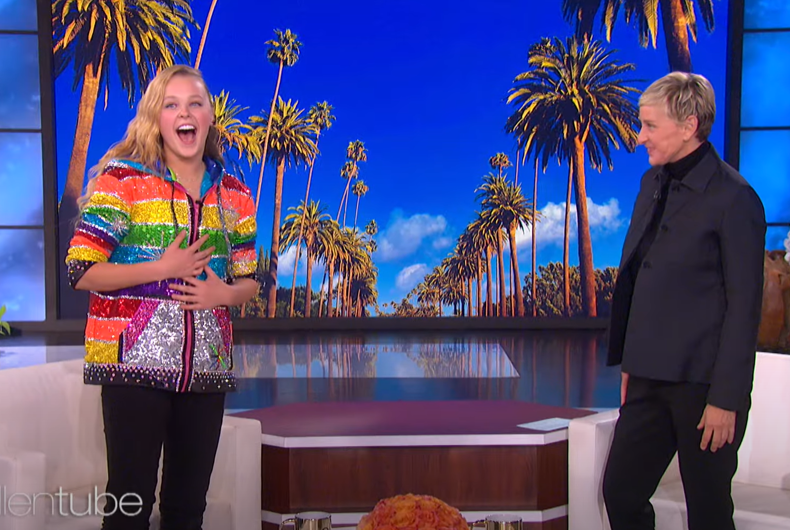 Pop sensation JoJo Siwa talked to Ellen DeGeneres about what it feels like to be called a gay icon in the year since she came out.

“It’s wild to me, I think because I look at people who are called gay icons… you, Lady Gaga, Freddie Mercury,” Siwa said, wearing a rainbow sequins hoodie and sparkly rainbow shoes. “To be in that category at 18 is just insane and it’s just because of who I am, it feels amazing.”

Related: Teen sensation JoJo Siwa couldn’t sleep for days because of backlash to her coming out

Siwa came out last year in an Instagram post where she wore a sweatshirt that said “Best. Gay. Cousin. Ever.” Since then, she has held nothing back, even as she faced hatred and pushback from some of the parents of her young fanbase.

Siwa told Ellen that her the concept for her current concert tour is “four-year-olds, and gay 19-year-olds. It’s like Kidz Bop meets Pride fest, that’s my concert.”

This year, she became the first celebrity paired with a dancer of the same-sex in 30 season’s ABC’s immensely popular show Dancing with the Stars. It’s not because she’s the first LGBTQ person on that show – far from it – but it’s partly because times have changed and partly because she is refreshingly unafraid to be herself in public.

Ellen, who broke barriers herself when she came out on her family sitcom in 1997, said, “It’s not a small thing to be that brave. And it’s getting easier in the world, but it’s a big thing for someone in this business to say, ‘I don’t care if there’s going to be repercussions, I don’t care what this is, this is who I am.”

Siwa explained that she was the one who insisted on dancing with a woman on Dancing with the Stars, saying that it would have been “weird” to “dance with a dude.”

She talked with producers who indicated that she could dance with a woman if she wanted to, “Without thinking twice, I was like, this is what’s right for me.

“Hearing adults say, ‘I wish I had someone like you when I was little,’ that makes me know that the kids that are little have someone like me,” Siwa said.

“Being partnered with another female on the show, it just shows all the little kids watching like, ‘Oh cool, boy-girl, ok cool boy-girl… Wait a girl-girl? That’s cool too,'” she said. “It just makes is more normal.”