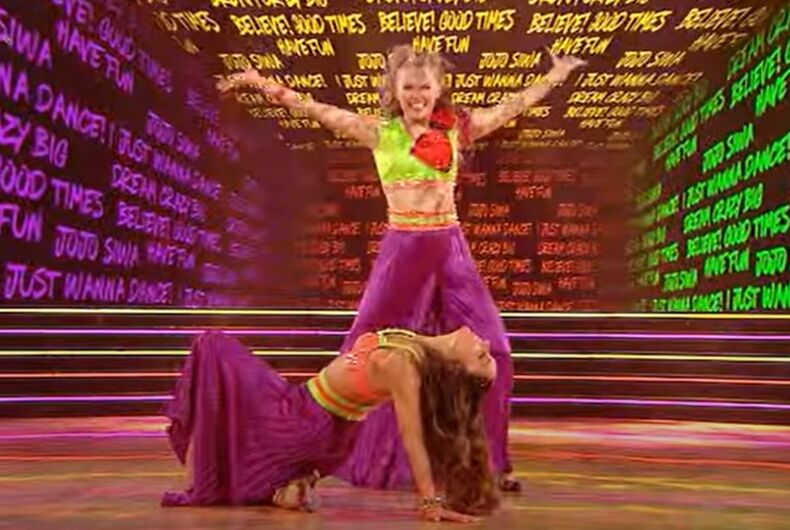 JoJo Siwa and Jenna Johnson danced the quickstep in the first same-sex performance on Dancing with the StarsPhoto: Screenshot

After 29 seasons of only allowing opposite-sex pairings to compete, the U.S. version of ABC’s hit dance competition Dancing with the Stars featured a same-sex pairing for the first time ever last night.

Teen pop star JoJo Siwa and dance partner Jenna Johnson performed a quickstep to Jet’s “Are You Gonna Be My Girl” for the season 30 premiere of the long-running show.

The women earned 29 points for their routine, the highest score of the night.

“I can’t even believe that week 1 is over!!!” Siwa wrote on Instagram, adding that she “couldn’t ask for a better partner” than Johnson.

“Making history and Top score of the night was literally a dream come true for me,” she wrote. “Chase every dream you have and believe in yourself.”

As her Uncle it warms my heart knowing she is seeing this type of example that I didn't have as much as a kid. A young idol spreading love, acceptance, and equality. 🌈#DWTS30 pic.twitter.com/XMGc0r5DEv

Love seeing history be made tonight with Jojo in the first same sex dance couple on Dancing With The Stars tonight. #DWTS pic.twitter.com/gqsFjhTWjO

this was cool as hell. so glad to see this happen and congrats to jojo siwa for insisting on a same sex partner #dwts pic.twitter.com/fOyWKBKShv

“It’s going to be tricky, but it’s going to give so much to people out there — people of the LGBTQ community, people who feel just a little different. It’s going to give them a sense of happiness,” said Siwa when her appearance on the show was announced.

Siwa is a kids-pop sensation, known for her appearances on reality television shows like Lifetime’s Dance Moms, her hit songs directed at a younger audience like “Boomerang,” and her positive presence on social media. She came out earlier this year and later introduced the world to her girlfriend.

School community rallies for lacrosse coach fired for being a lesbian