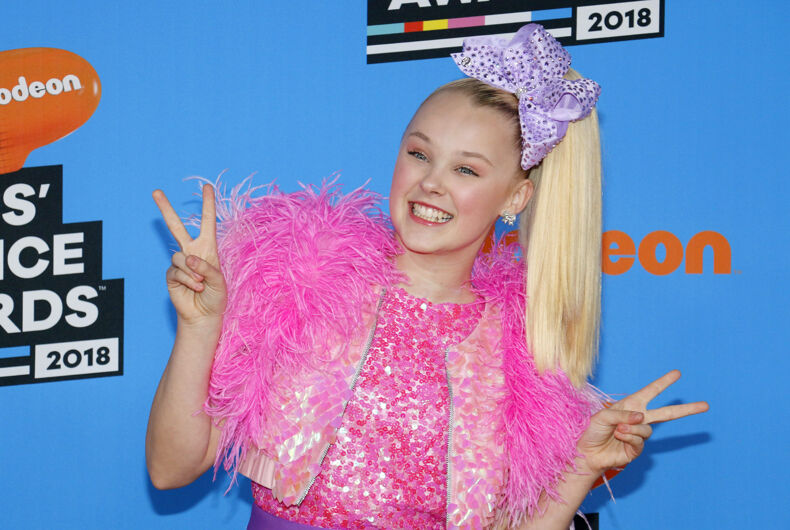 Siwa first came to prominence as one of the students featured in two seasons of the reality show Dance Moms. From there, she has grown into a YouTube personality, teen entertainer, and one of the most influential people in the world, according to Time Magazine.

Siwa, 17, has now publicly shared that she is gay for the first time, after hints of late have sparked online speculation about the teen.

She confirmed the news by showing off a gift from her cousin. It was a shirt that read “Best. Gay. Cousin. Ever.”

Siwa wore the shirt in a post to social media on January 22, writing “my cousin got me a new shirt” and thanking her for it. She also shared comments congratulating her and fans expressing how proud they are of her.

“She changed history today for the future of LGBTQ youth,” out online personality Tana Mongeau said on Instagram.

My cousin got me a new shirt pic.twitter.com/DuHhgRto7b

The likes of Bretman Rock, Ellen DeGeneres, James Charles, Smashmouth, Todrick Hall, and Trixie Mattel have expressed their excitement and well wishes for Siwa’s coming out.

Earlier in the week, journalist Yashar Ali shared social media-posted videos of Siwa, namely one of her singing along to “Born This Way” by Lady Gaga. “This feels like a big deal if it is what I think it is,” he tweeted, “JoJo Siwa is hugely popular with kids.”

The video, originally posted to TikTok, has been viewed at least 25 million times on its original platform alone, in less than a week.

Siwanators, as her fans are known, were quick to defend Siwa and establish that she doesn’t need to “come out” as long as the people in her life that she wanted to know were aware. Siwa shared some of their defenses.

At just 17, Siwa is already one of the most celebrated entertainers in the world. “JoJo Siwa is a ray of sunshine in a world that seems scary right now,” Kim Kardashian West wrote in her profile of the artist for TIME in September 2020.

“As a parent, you want your kids to admire positive figures. There’s no one more positive than JoJo… it’s no wonder my 7-year-old daughter North and millions of other children around the world adore her,” Kardashian West wrote at the time. “At some point, she’ll evolve and grow up a little bit, and that’s O.K. The people who love and support her will always be there.”

To date, Siwa has garnered over 12 million subscribers on YouTube alone. She has released three international-charting extended plays (EPs), and her debut single, “BOOMERANG,” came out when she was 13. It has been officially certified Platinum twice — while the video has earned over 930 million views — since 2016.

After starring on Dance Moms from 2015 to 2016, Siwa signed to Nickelodeon and has appeared on some of television’s top shows, co-hosting Lip Sync Battles Shorties with Nick Cannon and guest-starring on Spongebob Squarepants, Keeping Up with the Kardashians and Celebrity Watch Party. She was one of the recently revealed hidden stars on the third season of the popular singing competition show The Masked Singer.

Siwa also recently starred in Meghan Trainor’s “I Believe in Santa” video, dancing in place for the pregnant singer.

She is known for her trademark colorful hair bows, and has a line of signature hair bows with the retailer Claire’s. She originates from Omaha, Nebraska and hopes to make it to Broadway, according to IMDb. She’s previously expressed how much she loves other out singers such as Miley Cyrus and the late Freddie Mercury.

This feels like a big deal if it is what I think it is…JoJo Siwa is hugely popular with kids.

And as someone just pointed out, if it is what I think it is, she's doing it at the height of her fame when she's selling out arenas. pic.twitter.com/oD2YehbZwu

I’m a huge fan. I’ve gotten to know her personally a little and she seems to be a wonderfully genuine person.

🏳️‍🌈 @itsjojosiwa is on the right track, she was born this way 💕 pic.twitter.com/bqFMjeMmuC

Jojo Siwa is gay and it makes sense with my fantasy. 🏆🏆🏆 https://t.co/AMY12qRsKx

Will always support you.

IF GOD HATES US WHY DO WE KEEP WINNING

Dear President Biden: I created the trans flag. Please tell our embassies to fly it.