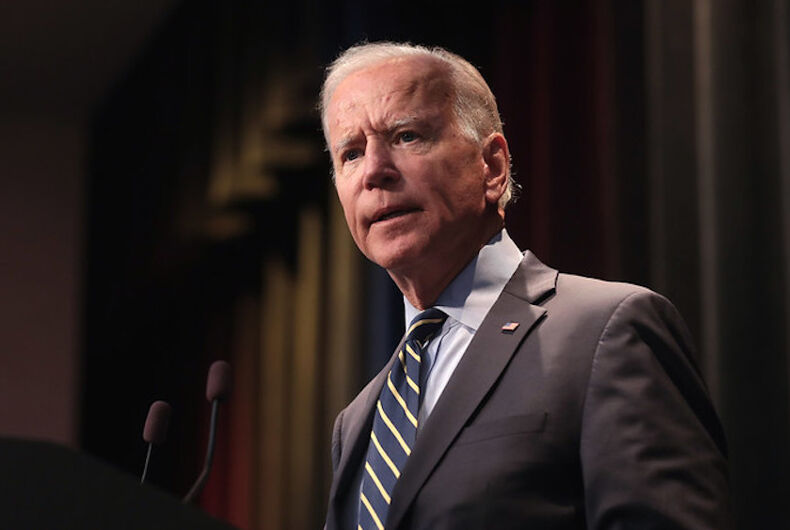 Among the many differences between Joe Biden and Donald Trump is the fact that Biden is a deeply religious man. Biden, only the second Catholic elected to the White House, began inauguration day attending Mass. He carries a rosary with him and has spoken about how his faith guides him.

Related: Biden promises to be a more progressive president than anyone expected

On Inauguration Day, Los Angeles Archbishop José Gomez, head of the United States Conference of Catholic Bishops (USCCB), issued a statement from the group that hid inside the atypical congratulatory spiel with a declaration of war.

“I must point out that our new President has pledged to pursue certain policies that would advance moral evils and threaten human life and dignity, most seriously in the areas of abortion, contraception, marriage, and gender,” Gomez wrote. “Of deep concern is the liberty of the Church and the freedom of believers to live according to their consciences.”

The media interpreted the letter as an attack on Biden’s pro-life policy. But it’s obvious that the blast was far broader and clearly included Biden’s LGBTQ policies. The references to transgender rights and the exceptions to LGBTQ legal protections is hard to ignore.

In some ways, the letter was not a surprise, even if it was in bad taste, coming on a day when the president was calling for unity. But what followed was more of a surprise.

After Gomez issued the statement, Chicago Cardinal Blase Cupich tweeted his own statement — not in support of the USCCB, but in criticism.

After calling the statement “ill-advised,” Cupich complained that the statement came as a surprise to many bishops, failing to go through the usual channels for approval. In essence, Cupich was saying that Gomez went rogue.

Cupich isn’t just any Church leader. He’s a close ally of Pope Francis. His objection carries a lot of weight because he’s presumed to be reflecting the Vatican’s position.

In fact, you didn’t even have to guess the Vatican’s dim view of the USCCB statement. The Vatican had intervened to spike the statement, which stood in sharp contrast to the pope’s welcoming congratulation to Biden.

Moreover, the Church headquarters even spoke out against the statement, albeit in diplomatic terms. “It is most unfortunate and is likely to create even greater divisions within the church in the United States,” a senior Vatican official told the magazine America.

In fact, the Catholic Church in the US is in pretty much the same spot as the Republican party. Both are riven by internal divisions.

Just as many white evangelicals have essentially converted their religion into politics (and vice versa), so too has a sizeable contingent of Catholics. Former Attorney General Bill Barr is a prime example. He was calling for a holy war in language that the religious right would find perfectly understandable.

Like conservative evangelicals, conservative Catholics share a rabid hatred of LGBTQ progress. A particular focus of their fury is James Martin, a Jesuit priest who has been pushing the Church toward greater acceptance of LGBTQ people.

Especially infuriating to the conservatives is that Martin obviously has the backing of Pope Francis. Then again, the conservatives already think that Francis is a heretic, in part because he doesn’t invoke hellfire every time he talks about LGBTQ people.

Now it’s not as if the pope is about to officiate at same-sex weddings in St. Peter’s. Francis’ moves have been rhetorical, not canonical. The Church’s official views on sexuality and gender remain unchanged.

Biden is now a representation of the Pope Francis wing of the Church. If anything, he’s a throwback to the Second Vatican Council, which promised to open a new window to let in fresh air. Pope John Paul II and Pope Benedict slammed that window and nailed it shut.

Biden proves that not all Catholics are like those from the Vatican Council or Bill Barr. (House Speaker Nancy Pelosi is a devout Catholic, too.)

He’s also a reminder that faith is not supposed to be synonymous with a single political viewpoint. But Biden will become a lightning rod for the Catholic right, most of whom openly worshipped at Trump’s political altar.