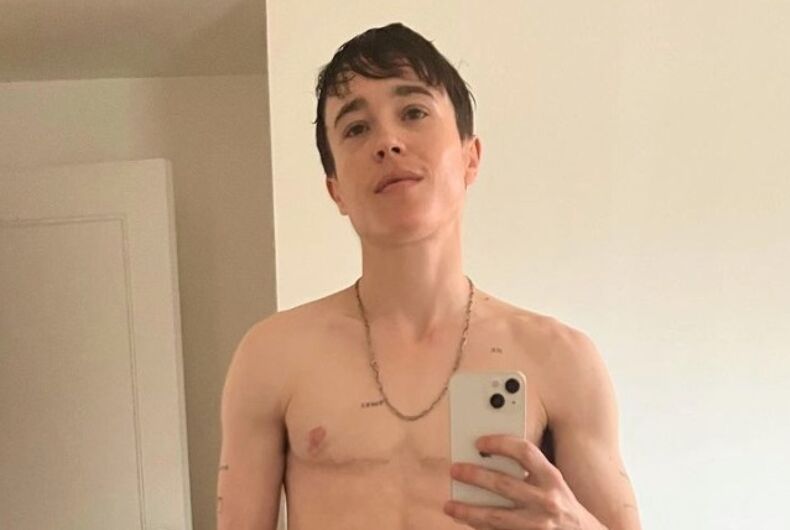 A shirtless selfie has brought queer Twitter to its knees.

“Oh good my new phone works,” he captioned the mirror pic of himself wearing only a pair of black pants and combat boots.

Page came out as trans last year and posted a shirtless photo in May after having top surgery.

The Academy Award-nominated performer, who currently stars in Netflix’s Umbrella Academy and is known for appearing in the movie Juno, announced his transition right before the massive anti-transgender campaign began in U.S. state legislatures. A longtime and outspoken advocate, Page has continued to speak out against what he called the “horrific” wave of legislation.

But Page’s bona fides as a performer and activist weren’t on anyone’s mind after he published his thirst trap photo that radiated pride and confidence. Fire emojis quickly lit up Page’s comments.

“Elliot Page is sooo fine, he should go to jail for being that hot and not taking me out to dinner,” one user posted.

“My cat’s name is Juno. I love Elliot Page with all my heart and reading about how happy he is after transitioning puts a big smile in my face. Love to see a successful actor be a healthy positive influence for our youth,” Virginia tweeted.

Another user noted that Page is short, Canadian, and jacked. That makes him perfect to play Wolverine in the Marvel Cinematic Universe, they said.

“You look so comfy and natural and I’m sobbing bc I hope I look that good after top surgery,” Micah posted. “As a random fan we all love you so much.”

But one user who has been retweeted frequently may have summed up the feelings for everyone perfectly.

@TheElliotPage who gave you the PERMISSION sir to be THIS mf fine😭 You look so comfy and natural and I’m sobbing bc I hope I look that good after top surgery 😭 a fucking ✨legend✨ as a random fan we all love you so much pic.twitter.com/IrMMneHlBe

Elliot Page is sooo fine, he should go to jail for being that hot and not taking out to dinner