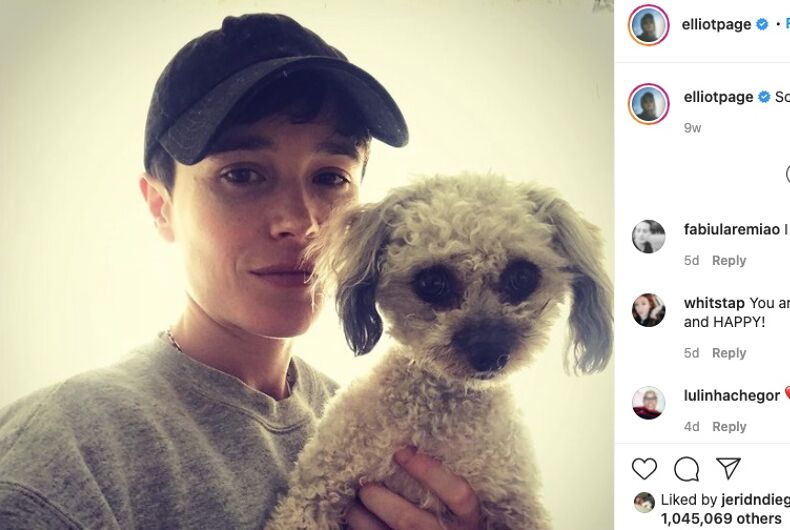 Transgender actor Elliot Page just dropped his first album, and while the three-track EP is unlikely to take the Grammys by storm, it’s a delightfully quirky first effort that fans will love.

The album is simply titled Mark and Elliot. It’s named after Page and his friend Mark Rendall. The two met in 2003, and this is their first EP together. “It’s a lo-fi bedroom pop adventure!” Page wrote on Instagram. The album cover also features a picture of Page’s dog, Mo.

The duo gave the album away for free on Bandcamp. It’s only eight minutes and 51 seconds long and combines their vocal harmonies with looped keyboards and drum machines. The end result is playful yet gentle, much different from some of the biting, hard-edged characters that Page has played on the big screen.

Page became a star through the hit 2007 film Juno, for which he got an Oscar nomination. He also appeared in the shocking pedophile drama Hard Candy, two X-Men films and the critically-acclaimed Netflix series The Umbrella Academy. In the series, he plays Vanya Hargreeves, a violinist with a destructive power to control sound waves.

But even though Page knew he was a boy since age nine, it took the pandemic for him to transition. “There are pervasive stereotypes about masculinity and femininity that define how we’re all supposed to act, dress and speak,” he explained after coming out. “And they serve no one.”

Since coming out in December 2020, Page has used his platform to oppose Republican anti-transgender bills nationwide.

“As I watch the movement of these bills attacking trans youth across the US… I am thinking of my trans siblings and the collective pain that our community must endure to battle again and again for our right to exist,” Page wrote. “These bills are upsetting, cruel and exhausting.”