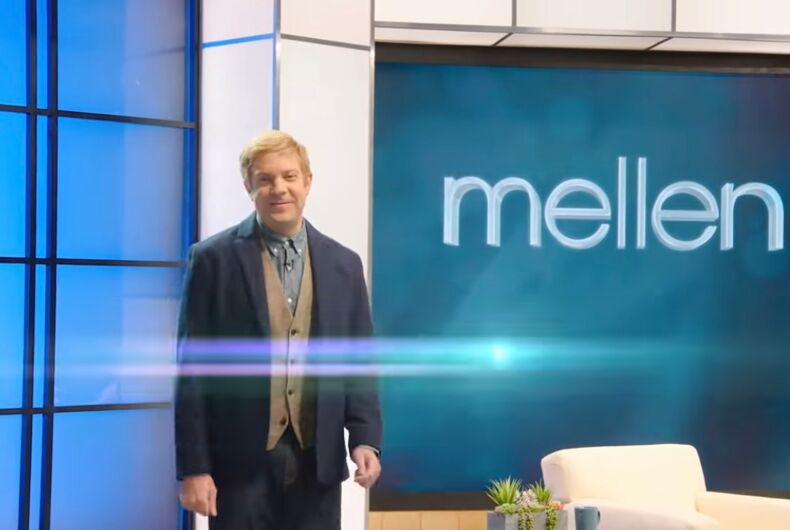 Last night’s Saturday Night Live featured actor Jason Sudeikis, a former cast member of the show and the current star of Ted Lasso, as the host. One of his pre-taped sketches for “Mellen,” a mock spin-off series deriving from the Ellen DeGeneres Show on daytime.

“Mellen” is pitched to audiences as a male-oriented show for daytime that ABC executives “thought about for 10 seconds,” targeting audiences of men that are home more than ever before.

Related: Leslie Jordan & Ellen reminisce about when he played a straight guy on her sitcom

In the preview, Irving is explaining why he won’t get the COVID-19 vaccine, while a doctor sneaks up and jabs him in the neck with a needle, vaccinating him, “Mellen style!”

Gritty goes around following people into women’s bathroom stalls and busting in, as a “sneak up surprise.”

Mellen, who “a week ago… was just a fan of Barstool Sports and high-value poster on 4chan,” is providing “no holds barred” entertainment and a “hard masculine edge.” The narrator for the show’s preview says, “Mellen won’t just hi-five the audience. He’ll nut-tap them too!”

In contrast to Ellen’s popular trend of having sweet and innocent children on her show, Mellen will have “kids that slap their teachers to get famous on TikTok.”

Reviews for Mellen’s show are already out — critics from the Chicago Tribune said, “Is this real?”

Even Ellen DeGeneres herself weighed in — or rather, her lawyers have. “Cease and desist!”

“Mellen” is sponsored by Peyronie’s disease, a genital disorder. “Not the treatment, but the actual disease!” the narrator clarifies.

Meanwhile, the real Ellen’s last show will air in spring 2022.