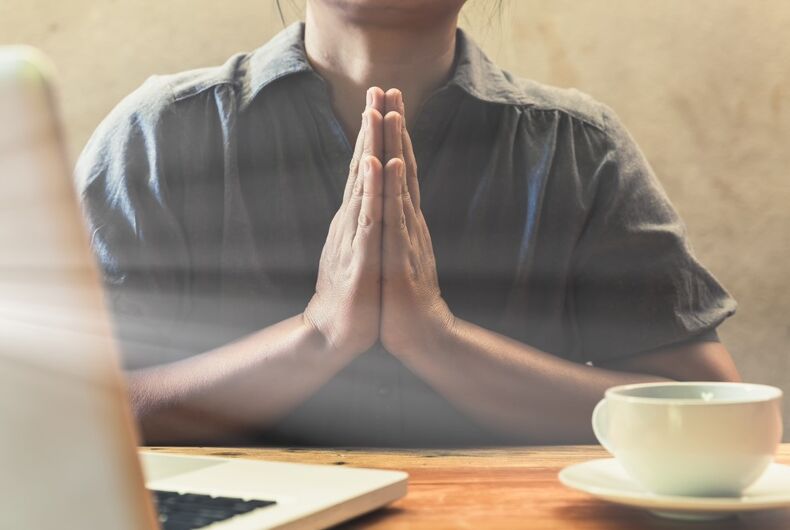 Donald Trump won a lot of attention last week for his new social media site called — ironically enough — Truth Social. The site wasn’t even live, but it had all the right hallmarks of a Trump enterprise: sloppy, unsafe and unlawful. Hackers got their hands on it and created a fake “donaldjtrump” account that featured a defecating pig. By the end of the week, Trump was being threatened with potential legal action by a software company for violating the terms of use for the open source code behind the site.

All the attention on Trump distracts from the fact that, in some ways, Truth Social is redundant. A thriving social network universe already exists for the Christian nationalists who love him. Through multiple platforms, the religious far-right has created its own bubble where they will plan to turn America into a Christian, Trump-loving paradise.

As part of a series of articles on Christian nationalists, the Religious News Service (RNS), which has been around for more than 80 years and is well-respected as an independent news outlet, took a deep dive into the Christian social media echo chamber. What RNS found is a world where Christians can surround themselves with conspiracies and misinformation without worry that reality will intrude upon them.

The highest profile site is Gab, billed as a Twitter alternative. A visitor to Gab will find misinformation about COVID, calls to arrest NIH head Dr. Anthony Fauci, and lies about the 2020 presidential election. One post, liked by more than 4,000 people, shows a gloating Trump under the line, “Show me a pic of pregnant Michelle Obama, and I’ll concede the 2020 election.”

Gab is the brainchild of Andrew Torba, who has said the site’s goal is to “preserve a parallel Christian society on the internet for generations to come.”

“One day our great grandchildren will learn what really happened during the greatest Spiritual war of our time and how we laid the foundations for a new parallel Christian society,” Torba has said.

Sometimes the secession is not so quiet on Gab. The organizers of the attack on the Capitol last January found Gab a handy tool for the insurrection, with postings going so far as to tell people to hunt down Mike Pence. (Apple and Google have banned the Gab app from its stores.)

The insurrectionists also found secular social platforms, including Facebook and Twitter, useful. But Gab, while decrying the violence behind the insurrection, seemed to go out of its way to position itself as the place for people who believed the Big Lie about the election.

Its numbers more than doubled, to 3.4 million, in the weeks after the attack. On February 1, Torba reminded Gab’s users that “America is a Christian nation. The foundation of Western Civilization itself is built on Christianity and more specifically: on the firm foundation of Jesus Christ.”

There are other sites as well. CloutHub, for example, touts itself as a site that it is “bringing people together.” Like Gab, CloutHub had a place in the January 6 insurrection, as users allegedly organized “Patriot Caravans” to the protest that day.

There’s also Brighteon, a YouTube-like site, where a low-quality video of someone who claims to have survived an “assassination attempt using gene-targeted bioweapons” can garner more than 73,000 views.

All three of these platforms are hosted by Epik.com, whose CEO, Rob Monster, describes himself as a Christian libertarian. In keeping with the under-siege mentality of the religious right, Epik advertises domain registration to potential customers using battle imagery, making the ad look more like a violent video game than a hosting solution.

#HoldingTheLine at $8.49 .com renewal rates, with $6.99 inbound transfers, and $7.99 on new domain registrations. Our customers deserve better than multi-year arbitrary price increases, given the challenges so many face in current times. So do yours. #domains pic.twitter.com/1BoiRyiPpn

Security on the sites leaves something to be desired. Gab was hacked last February. Torba blamed “mentally ill tr**ny demon hackers” for the breach. Epik suffered a hacking in September, which Monster responded to with a “prayer meeting.” At the meeting, Monster said that his team had put a hex on the files during a “courts of heaven” prayer session.

“I’m just giving you a heads up. There are curses. Laptops will burn. Hard drives will burn,” Monster said.

The far-right’s social media universe is trying to go up against the big guns on the internet. After all, why would one need Gab, when the the top ten posts any given day on Facebook are dominated by the likes of right-wing pundits Ben Shapiro and Dan Bongino, and religious right leaders like Franklin Graham?

The top-performing link posts by U.S. Facebook pages in the last 24 hours are from:

But the existence of the networks show that a significant number of Americans want to remove themselves from the rest of the country and live in a parallel universe. The social networks — secular ones like Facebook included — facilitate that fantasy and the vehement polarization that comes with it. No wonder the sites became a draw for extremists.

The real threat is that it will convert anyone else on the sites to become extremists as well.

Will the next Charlottesville start from suburban school board meetings?