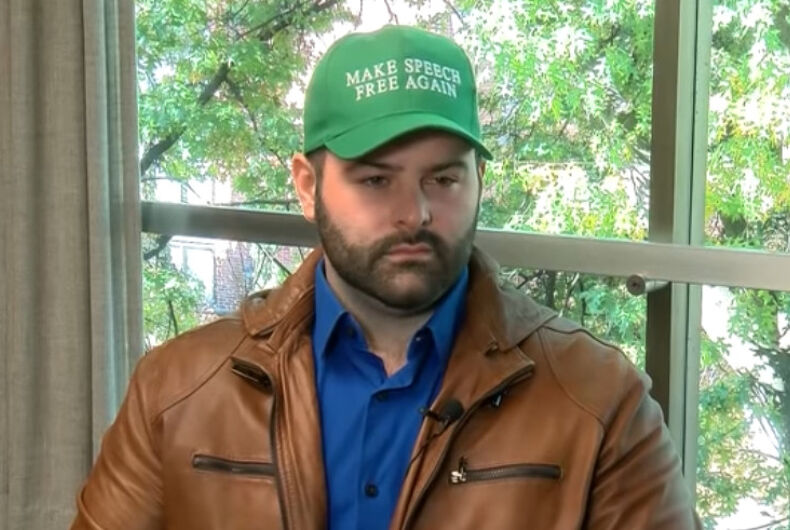 The far-right website Gab has been hacked and the CEO, Andrew Torba, has a strange explanation for what happened. He’s blaming “mentally ill tr**ny demon hackers” for the breach.

In a public statement about the hack, he even added “I’m very serious.”

Related: Ted Cruz tells a transphobic joke to warm up the audience at CPAC

Emma Best, the co-founder of the WikiLeaks-style group Distributed Denial of Secrets, announced the hack and is apparently the person Torba blames for the attack. Best helped to disseminate the news and content online.

The group has also helped to distribute the information found when the far-right app Parler was hacked. The contents shared online helped authorities to identify insurrectionists who stormed the Capitol building during the MAGA riot.

The Gab hack included all public posts and profiles, private group and individual posts and messages, along with user and group passwords. Photos and videos uploaded to the site were not taken.

Torba’s statement added that both his and Donald Trump’s accounts were compromised. It’s not clear if the Trump account is actually his or simply an account created by Torba to insinuate the former president is a user.

Gab is being hacked by "mentally ill tranny demon hackers" according to CEO Andrew Torba, who said "my account and Trump's account were compromised"

What he doesn't mention is that "Trump's account" is a fake account set up by Torba to try and boost Gab's profile…. https://t.co/gqjVkdyZCt

“It contains pretty much everything on Gab, including user data and private posts, everything someone needs to run a nearly complete analysis on Gab users and content,” Best wrote in a text message interview with WIRED. “It’s another gold mine of research for people looking at militias, neo-Nazis, the far right, QAnon and everything surrounding January 6.”

Like the Parler information, the data from Gab will be made available to researchers, journalists, and law enforcement.

Best has since changed her Twitter display name to include “Demon Hacker.”

the bitches who took down gab pic.twitter.com/Jf6VCBYyBe

This is the new standard for bad incident reports. It has:
* Transphobia
* Stigmatization of mental illness
* Demon hackers
* A clarification that this is not a troll

I thought I'd seen it all, but then Gab said "hold my beer" pic.twitter.com/Aa20QQvVgv