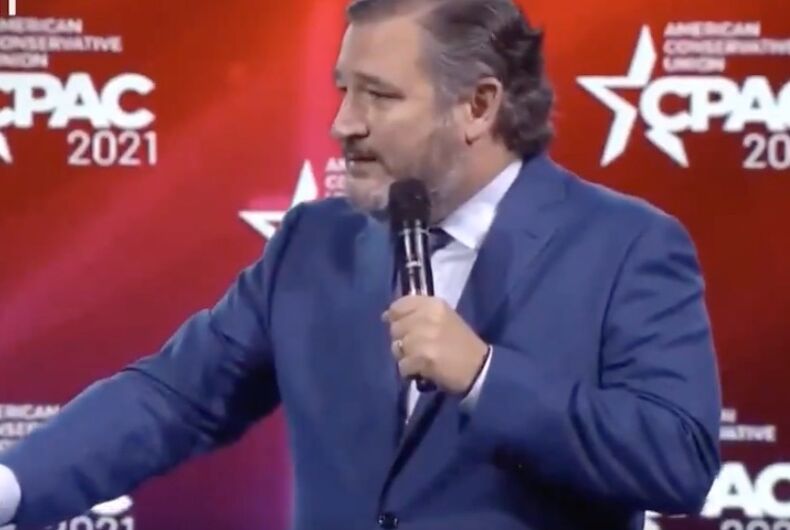 Sen. Ted Cruz (R-TX) may have been vilified by Republicans and Democrats for trying to sneak off to Cancun, Mexico while his constituents suffered through an extreme winter storm without electricity or water, and his halfhearted apology has been belied by his fiery remarks that it was all just a media frenzy.

He’s so unapologetic for abandoning voters during the state’s biggest weather crisis in decades that he opened his speech at the Conservative Political Action Conference (CPAC) with a joke about it. And he tried to continue his “comedy” routine with jokes about transgender women.

“Orlando is awesome,” Cruz quipped. “It’s not as nice as Cancun.”

After being busted by other travelers and shamed on social media, Cruz returned to the U.S. and blamed his daughters for his decision to flee the state. His shamefaced reappearance didn’t stop the memes and jokes – especially after he was denied an upgrade to business class.

In addition to being universally despised in a party that somehow embraces the likes of Laura Ingraham and Rep. Steve King, Cruz also holds the distinction of being one of the most anti-LGBTQ senators in a chamber full of them.

The list of Cruz’s most bigoted moments is long, but the following gives you a sense of just how awful he is.

There’s plenty more where that came from.

Sen. Ted Cruz (R-TX) at CPAC: "Orlando is awesome. It's not as nice as Cancun." pic.twitter.com/TghkHUhOPy

Ba-dum ching. He'll be here all week…or until he's issued a subpoena.

True. They're never sorry, only sorry they got caught.

Should religious leaders be held responsible for oppressing LGBTQ people?