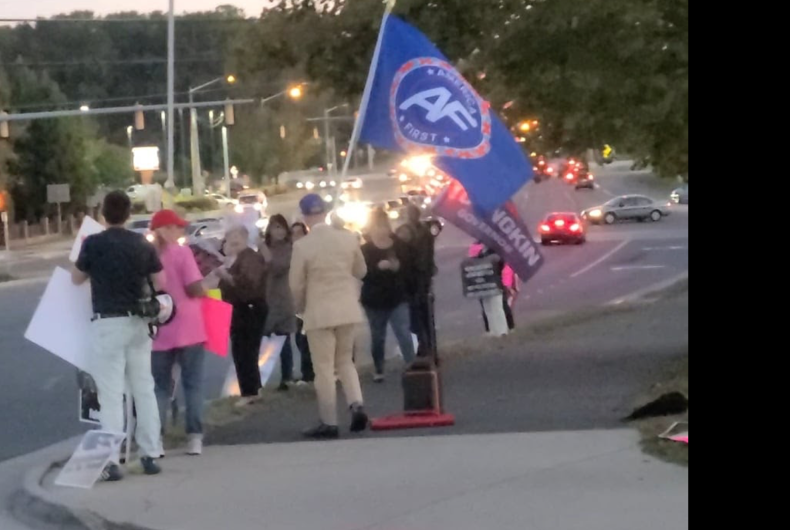 White nationalists carrying an "America First" and "Youngkin for Governor" flags outside a school board meeting on October 21, 2021 in Fairfax, VAPhoto: Jennifer Litton Tidd

In the northern Virginia suburbs, we, along with the entire nation, watched in sheer horror as white nationalists — bearing tiki torches, chanting “Blood and soil,” and “Jews will not replace us” — marched through the streets in Charlottesville in August of 2017.

Charlottesville is a charming college town in central Virginia, about 100 miles south of Washington D.C. We weren’t shocked white supremacist groups like the Klan, Proud Boys, America First and many more of that ilk marched in Charlottesville, because woven into the tapestry of Virginia’s past is the malevolent history of the Confederacy, which too many still celebrate here.

Most in northern Virginia still believed that this would not happen here, though. Except it is happening here now.

In other words, manufactured issues to excite the Republican base to compel them into voting booths next month.

Many parent groups nationwide began as grass roots activism, pushing to open schools, but were quickly commandeered by conservative operatives ready to exploit parental angst and frustration from the pandemic into a Tea-party style movement. Like their rabid precursor, they effortlessly glide from one scandal to the next, precisely synchronized with the news ticker on FOX, under irate faces on a split screen.

Bombastic faux outrage is performed, then amplified by their media, and daily, a sparkly new conservative martyr mom is born. The money-changers on the top tier of the pyramid scheme of the extreme right don’t have to pay their minions to perform for regressive causes, because they aren’t working for food, but for infamy. The prospects get to transcend the mundanity of bourgeois suburban living, by suddenly having a more significant purpose than slicing oranges for Saturday’s soccer game.

I’m a Mom in the suburbs; I get it. I’m also an activist, and again, I get it. I think children are worth fighting for, and I would lay down my life for any of my four children.

But these groups do not represent my children or me — they never have. If they gain power, my children will be in grave danger, as will all Virginia children on the margins.

Here in Northern Virginia, most of us have watched this all unfold as we roll our eyes at how predictable it was for our statewide elections on November 2. We’d honestly prefer to just wait it out, and find relief from robocalls and histrionics after the election.

Except we can’t. Because this time, unlike the Tea Party, this isn’t just some adults screaming at each other, but several people coming after our children.

Since June, I’ve seen teens from vulnerable groups subjected to online bullying by adults. I’ve seen adults heckling students speaking at school board meetings. I’ve seen adults accosting teenagers at a rally. I watched parents plan a counter rally to a teen rally to silence them. I’ve talked to people who have been doxxed and threatened.

I’ve seen book burners pushing to remove all LGBTQ content from our school libraries and try to end racial sensitivity training for school staff. I saw a high school student tweet about an adult activist from one of these groups harassing him after he left the polling station. Many parents and students don’t feel safe to come to community meetings that should be accessible to everyone.

I wonder if our school board members feel safe. How could they? I’m genuinely afraid for them. We have three who are direct targets for recalls, but others are being stalked and harassed, both on and offline. The criteria for the three they chose to target was they were the three with the lowest vote counts in the 2019 election, hence the easiest to gather the number of signatures required by state law. So, they didn’t choose the worst, just the least cumbersome to dislodge.

Rather than effective activism, they’ll settle for quiescent slacktivism: We’re here, we’re outraged, but no point in missing a hair appointment over it.

I attended the Fairfax County School Board meeting  this past Thursday night. I was relieved that more sane folks, who’ve had it with all the noise, showed up to counter it. Most of us have watched in horror at the dog and pony show in our neighboring district of Loudoun County and really don’t want the same level of hysteria here.

I was recently moved by a resolution passed by the school board for people like my son who communicate with Augmentative and Alternative Communication (AAC). I was pleased to hear them saying that access to communication for nonspeakers is a human right. Afterward, some families of neurodivergent nonspeakers had a photo taken with the School Board. Two little, high support needs, nonspeaking children were in the photo.

For me, someone who has a 15 year-old nonspeaking autistic child, it was a meaningful moment. Nonspeaking neurodivergents are a group who suffer the constant discrimination of low expectations, which all too often leads their abuse and neglect.

Later in the meeting, one of the ‘nasties’ ended her rant by saying the “special needs” children who were photographed shouldn’t have had to wear masks. After an affirming resolution for one of the most vulnerable populations in the school system, and all she could muster was more anti-mask hysteria straight from the Trump fever swamp? That’s all she had for our children? I thought. Thanks for your advocacy, lady, now sit down.

I was relieved both of the small children had already left, and didn’t hear it, but add high support needs, nonspeaking disabled children to their list of victims to bully. Why leave anyone out? This must be their version of inclusion.

The simple truth is that children, especially those who are marginalized, don’t feel safe at our school board meetings anymore. I wanted to bring my autistic son to the AAC resolution, but left him home, because I feared for his safety.

I spoke with other students and parents after the meeting, and people are scared. It was difficult to find people to go on record, because they’re fearful of threats, doxxing, destruction of property, or violence in retaliation for speaking, even when I told them I would share no identifying information.

Jason, a trans student from Oakton High School, talked to me about the recent removal of LGBTQ books from their school library. Jason paused and teared up for a moment while speaking, saying, “This sort of agenda doesn’t feel good to have in schools, like, anti-LGBT agenda makes all students feel unsafe. It feels like so much we’ve gained is actually moving back. I just don’t feel safe anymore. ”

Another woman from Annandale, a lesbian who was clearly in pain as she spoke, said, “I came here tonight because I saw about all this on the news. I remember what it was like to be a queer high school student, so I wanted to support queer kids. My wife is a Black woman…she’s also a veteran, [she’s served] three tours in Iraq. She said she wanted to come, but she feared for her safety… and…she felt as a queer Black woman, that… that this is a space where she would not be welcomed, and she might get hurt.”

A Black woman named Patrice told me, “My Black son, who is a senior in high school, has wanted to come, but I came tonight to check it out first, to make sure there is security, you know, and make sure he’d be safe. I won’t be letting him come after seeing white nationalists out front.”

Robert Rigby, an LGBTQ teacher who has taught in Fairfax County Public Schools (FCPS) for 23 years said, “I’ve seen a lot, but openly bringing white supremacy symbols to school board meetings takes it to a whole new level.”

A librarian from a FCPS high school contacted me on Twitter after my first article posted, telling me that she has been an activist all her life and that she wanted to come to the student rally two weeks ago, but she was afraid of what might happen to her or that her young child might be harmed.

Yes, our school librarians are under attack. They’re being accused of being predators for stocking LGBTQ books in school libraries.

Has the bar been lowered enough yet? Will these moms, or Virginia Republican gubernatorial candidate, Glenn Youngkin, who keeps repeating he stands with these parents, denounce known hate groups rallying with the same parents he tells us he listens to for school curriculum?

Is there any low to which they are not willing to stoop? I have yet to find their bottom. I’m afraid of what that might be.

Sure, it may be easy for people to write us all off as if we’re all just snowflakes, but maybe many Virginians find the trajectory of this movement disturbingly familiar. We understand this vicious bigotry isn’t only our past, but our present.

There are white supremacists from America First, who are in fact domestic terrorists, waving their massive flags around, yucking it up with all the Moms who keep screaming that they themselves aren’t domestic terrorists.  (Nobody has ever called dissenting parents that; that is a right wing talking point, and although a complete fabrication, it’s been effective for them.) Maybe these parents don’t know with whom they were in league that night, but many of us do, and we found it chilling.

“America First” is the name of a podcast hosted by far-right activist Nick Fuentes, who appeared at the 2017 “Unite the Right” rally in Charlottesville, and later taunted people protesting the killing of George Floyd in police custody. Fuentes’s followers and associates call themselves “Groypers” and use Pepe the Frog imagery as a calling card. According to the ADL, the “Groyper Army” has tried to distance itself from the white supremacist label, but continues to espouse racist and anti-Semitic views.

“If you build it, they will come.”

When a wall is built around our public discourse — made entirely of hatred for people who are Black, Brown, LGBTQ, disabled, and even librarians, where bullying children isn’t off limits — they will come. And they did, to a school board meeting in Fairfax County Virginia on October 21, 2021, four years after they terrorized Charlottesville, and ten months after they laid siege to the United States capitol.

On Thursday night, in Fairfax County Virginia, four years after Charlottesville, I was terrified to walk alone to my car after a school board meeting, because if I’m being honest, I think we may be the next Charlottesville.

Jennifer Litton Tidd is neurodivergent, a human rights activist, and co-founder of Neurodivergent Liberation Coalition (NDLC), an intersectional group of activists with the intent of building a diverse neurodivergent-led movement to guarantee personhood and rights to neurodivergent people. She lives in the DC area with an amazing husband and four children. She’s a creative who loves to read, write, and agitate, not necessarily in that order.