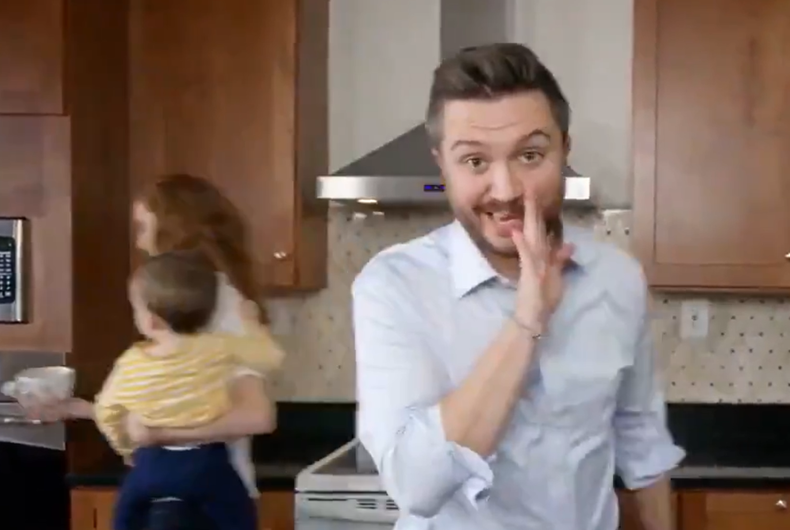 The dad who barely lifts a finger to co-parent with his wife says that trans kids are the real threat to cis children. Photo: Screenshot

Rep. Lauren Boebert (R-CO) and other top GOP politicians are standing up for an anti-LGBTQ organization after YouTube flagged one of their videos and temporarily suspended their account.

The very heterosexual video features an unquestionably straight man calling his wife “hot stuff” to show just how heterosexual he is while he rants about transgender students.

Related: Wave of bills attacking transgender youth inspires protests all over the U.S.

Rightwing media has been wailing about YouTube – a private company – flagging a video from the American Principles Project (APP) that attacked transgender youth and momentarily suspending the group’s account this past weekend.

The video shows the group’s leader, Terry Schilling, getting ready for the day in the morning in his enormous house with his dozens of children.

“Being a dad is the most important job in the world,” the dad says. “We help them through the scraped knees, the stupid homework, and the breakups.”

He walks through the house and interacts with his children – stopping to dump The 1619 Project in book form in the garbage – but doesn’t do much to actually help take care of them.

“Hot stuff coming through,” he says as he hands his wife a cup of coffee while she carries one of his many, many children. He turns to the camera to say “wife and the coffee,” lest anyone think he’s less than fully heterosexual.

Then the ad turns hateful. He says that being a dad is “about sacrifice” – specifically the rights transgender students should sacrifice to make him more comfortable.

Politicians are “trying to destroy our daughters’ sports by allowing boys to compete against them,” he falsely stated. This past year has seen numerous state-level politicians ban or try to ban transgender girls from participating in school sports. No one is talking about boys playing on girls’ teams and politicians have been rolling back trans equality, not expanding it.

His wife then gets exactly three words in before the dad continues to ramble about how the APP will help make it easier for people to “get married, have babies, and protect our kids” – well, only the cisgender kids – and the two-minute, fifteen-second video is over.

“Stand up to censorship and stand with the patriots at” APP, Boebert wrote, sharing a tweet from June about the video.

Stand up to censorship and stand with the patriots at @approject https://t.co/YCGcpiAu3k

The APP President told the conservative news site Daily Signal that YouTube’s content moderation is “an affront to values which underpin the First Amendment” and is “un-American.”

Sen. Tom Cotton (R-AR) called on Congress to “pass legislation cracking down on monopolies like Google,” which owns YouTube, because the video got flagged. Statements like that, though, could make it easier for Google to argue in court that Congress wanted to punish the company for its content moderation choices, should Congress pass a law targeting Google’s market share.

People on Twitter had other questions about the video.

Dude, you're just trying too hard to look straight.

Some please tell this dude and his beard: it’s ok to be gay.

Schilling and APP produced several political ads last year that attacked President Joe Biden for supporting transgender youth. The ads featured ex-gay, ex-trans, ex-drag queen Kevin Whitt, who would go on to be fired by the Texas Republican Party for his possible ties to the Capitol Insurrection and bizarre conspiracy theories.

Whitt last made the headlines when he tried to take a picture of a child going to the bathroom at the Texas state legislature before security stopped him.

Schilling is not out as part of the LGBTQ community despite the misconceptions.