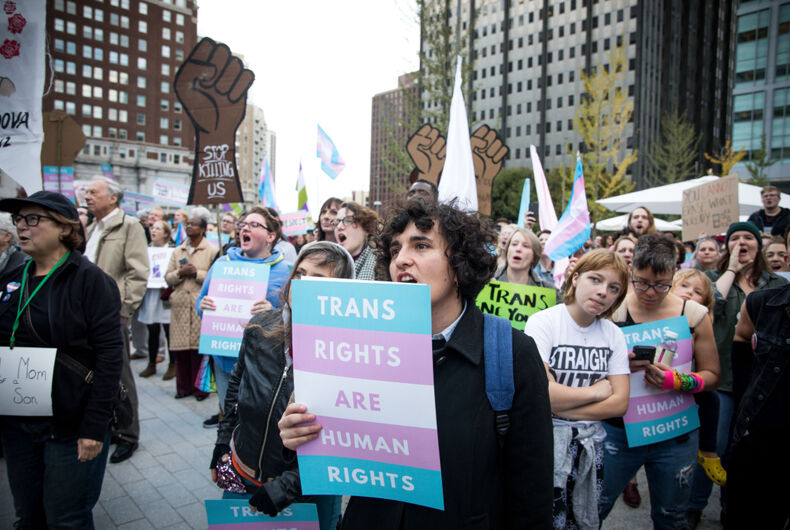 Protestors demonstrate against the Trump administration's attempt to write transgender identity out of the law in 2018 in Philadelphia.Photo: Shutterstock

Protests against anti-transgender bills have been organized across the country as transgender, LGBTQ, and supportive people try to prevent Republicans from eroding young people’s rights.

A rally was held last week at the Arkansas State Capitol to bring attention to H.B. 1570, a bill that would criminalize doctors who provide gender-affirming care to transgender youth. Bills to ban trans youth in sports and to require teachers to only refer to students with the name on their birth certificate have also been introduced in that state.

“This really sends a clear message to trans children that we don’t want you in Arkansas. We don’t see you as valid,” said Willow Breshears, who is transgender, at the rally.

I’ve had to go to the Arkansas Capitol enough to protest and rally that I know when I can or can’t bring my dog. Dog was in for supporting trans rights. pic.twitter.com/76Cz4OoIbu

HRC has counted 82 anti-transgender bills introduced in state legislatures this year, which mostly attack transgender youth. The bills would ban transgender girls and women from playing school sports and criminalize doctors and therapists for providing gender-affirming care to trans youth. A few also attack transgender rights in schools by requiring teachers to out trans students to their parents and a few states are even considering bathroom bills.

In Montana, protesters rallied this past Monday as Republicans are trying to pass multiple anti-LGBTQ bills, including an anti-sports bill, an anti-medical care bill, a bill that would make it harder for trans people to update the gender markers on their birth certificates, and a bill to expand religious exemptions, which LGBTQ activists say would be used to fight against local discrimination laws.

LGBTQ people have been “begging for their basic human rights to people, mind you, that we have to interact with every day,” said Kelsen Young of the Montana Coalition Against Domestic and Sexual Violence.

About 200 people, including some lawmakers, attended the rally with rainbow and transgender flags and signs supporting LGBTQ rights.

“I think it’s great that this many people came out to support this,” two of the protestors told the Daily Montanan. They added that the bills are “embarrassing” and “absurd.”

“I wish we didn’t have to rally in opposition to the constant attacks against the queer and trans people in Montana,” said S. J. Howell of Montana Women Vote. “This is not what I want to be spending my time on, nor do I think it is what the legislature should be spending their time on.”

Dozens of people gathered outside the Montana Capitol to protest against several anti-#LGBTQ bills that are being considered by the state's legislature https://t.co/EnFqMXlBFf #LGBT #transgender #transrights pic.twitter.com/BuuD1EdZEV

Well done to the supportive community in my hometown of Helena, Montana, for gathering to protest the anti- LGBT+ and trans bills being debated in the legislature 🏳️‍🌈🏳️‍⚧️

The MT queer community is "begging for their basic human rights," one organizer said. https://t.co/Yi3yhbNES1 pic.twitter.com/znE2OeZrsA

Earlier this month, about 40 protestors in Alabama gathered at the state’s legislature in Montgomery to protest two anti-trans bills the state is considering: an anti-sports bill and an anti-medical bill.

“I currently am not comfortable in my own skin,” student Phineas Fleming Smith told the Montgomery Advertiser. “But testosterone and hormone treatments and all of these gender-affirming surgeries, for some it means life or death.”

Some of the protestors spoke out against how state legislatures don’t have much understanding of the issues they’re trying to pass bills on. Alabama State Sen. Shay Shelnutt (R) said that he proposed his bill to ban gender-affirming care to trans people under the age of 19 because he believes that they aren’t old enough to consent to “surgeries and drugs.”

Even though, as protestor Chris White pointed out, “That is not done to anyone underage.” White’s daughter is trans.

In February, people marched in several cities in South Dakota to protest an anti-sports bill, where they chanted, “Let kids play.”

So many people out today in Sioux Falls supporting trans folks! The crowd chanted “LET KIDS PLAY!” And urged the defeat of HB 1217. #sdleg pic.twitter.com/s8pHnCXPmf

They were also rallying in January.

We are here to support our trans relatives and friends. #TransRightsAreHumanRights. Trans people belong in South Dakota! pic.twitter.com/U9964nGE7E