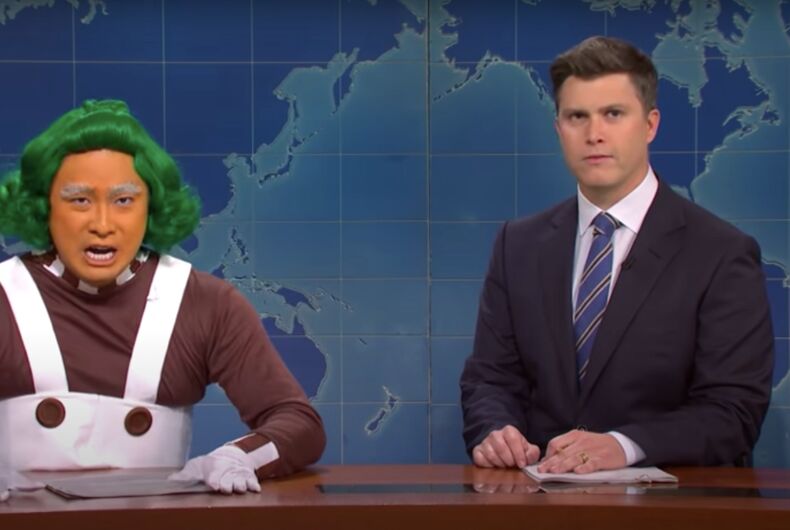 Related: SNL’s Lil Nas X gives God a lap dance in front of Britney Spears, “just to even things out”

To discuss the matter, Jost introduced Bowen’s character as a “proud gay Oompa Loompa”, dressed as one of the green-haired and orange-skinned workers from Wonka’s factory in the 1971 film.

However, while the worker expected to discuss the factory’s dangerous working conditions, he also said that Jost had just effectively outed him on national television to everyone including his less-than-accepting parents.

“I just didn’t want my family to find out like this,” the worker said. “They live in Loompaland. It’s not as progressive as here. They, like, just got Will and Grace. So yeah, it’s gonna be a conversation.”

But being outed allowed the worker to drop all pretense of finding Chalamet’s “twonka” “scrumdiddlyumptious” and “as yummy as lickable wallpaper.” Instead, he started being real about how “the man doesn’t know how to make chocolate.”

“Meanwhile, we’re up all night rehearsing the little song and dance we do when a child dies,” the Oompa Loompa added. In the Wonka films and original book, the Ooompa Loompas sang moralizing songs every time one of the greedy, self-involved child visitors accidentally fell into the factory’s various machinery.

Elsewhere in the broadcast, Bowen played Russell, the flamboyant seventh-grade schoolchild of two dads. Russell had been told to play the role of a cockroach in the school’s biology assembly about bugs, but he independently decided that “it wasn’t a fit.”

So instead, Russell dressed up as a Daddy Long Legs spider, and really played up the “daddy” aspect. When asked what he eats, Russell answered, “Boys, boys, boys.” When asked how he attracts prey, Russell slapped his credit card down and announced, “Daddy’s got it.” He then started voguing on stage for “the judges” even though the assembly wasn’t a competition.

When the principal asked Russell’s teacher what the student’s deal is, the teacher explained, “Well, his dad’s an exec at Bravo. His other dad is a Republican, and honestly, this is the first time I’ve ever heard him speak.”

While Bowen’s characters definitely resort to gay stereotypes about flamboyant and dramatic gay men, he’s at least exposing mainstream audiences to gay content and culture which provide greater gay visibility, even if it is somewhat pandering.

Kyrsten Sinema seems intent on dragging down the Biden presidency