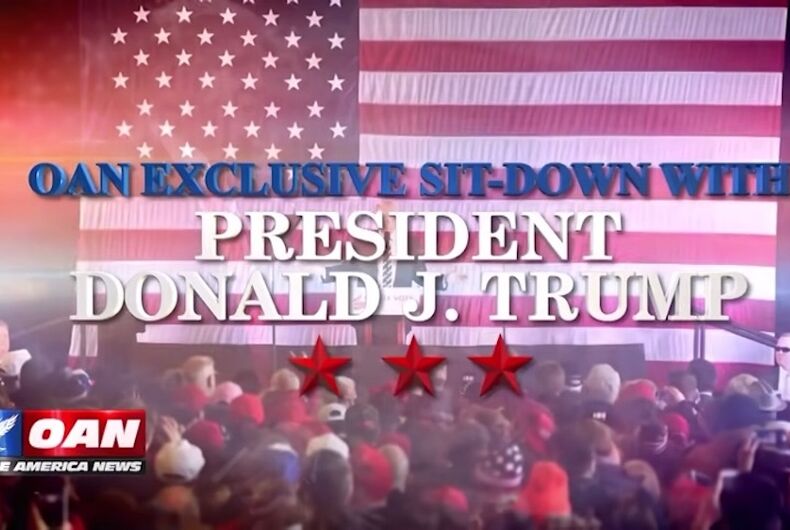 The One American News (OAN) Network is so far to the right that it makes Fox News look like the BBC. Up until recently, the story was that Robert Herring Jr., a self-made businessman and OAN’s chief executive, decided to launch the network in 2013 to promulgate his own extreme views. But a Reuters special report has revealed that the idea wasn’t Herring’s.

OAN owes its existence to AT&T.

The media giant, which owns WarnerMedia and subsidiaries CNN and HBO (for now), actually raised the idea with Herring, according to documents Reuters uncovered.

“They told us they wanted a conservative network,” Herring said during a 2019 deposition. “They only had one, which was Fox News, and they had seven others on the other [leftwing] side. When they said that, I jumped to it and built one.”

Since then, AT&T has been OAN’s financial savior. Reuters reports that in sworn testimony, an OAN accountant attributed ninety percent of OAN’s revenue from a contract with AT&T-owned television platforms.

In a statement, AT&T claimed that it never helped “fund” OAN and has no financial interest in its success. It never had to — their contracts with OAN did all the work. By its own account, OAN would be virtually worthless without its deals with AT&T, based on Reuters’ reporting.

With its investment, AT&T has done its part to contribute to the dissemination of lies, falsehoods and authoritarian memes that undermine democracy.

OAN has been a propaganda machine for Donald Trump, who praised the network when he was president. “OAN–they treat me very nice,” Trump said during one news conference last year.

Unsurprisingly, in turn, the network has also become a leading purveyor of lies about election fraud, to the point that one of its reporters actually helped fund the amateurish audit in Arizona. (The “audit” found that Biden won more votes than previously reported.) The network has welcomed MyPillow tycoon Mike Lindell and his bizarre accusations of election fraud, despite the legal cloud that is hanging over him.

Indeed, OAN has become the favorite of hard-core Trumpists who feel that Fox News is not conservative enough. The network has suggested that the Capitol Hill insurrection on January 6th, which Trump incited, was actually a false flag operation carried out by “antifa” activists in disguise.

OAN has also done its part to spread misinformation about COVID-19. The network’s YouTube channel was temporarily suspended for promoting false cures for the virus. At the start of the pandemic, one OAN reporter even floated the conspiracy theory that the virus originated in a lab in North Carolina.

Of course, OAN has also been a reliable dispenser of anti-LGBTQ hatred. Moreover, the network doesn’t try to be subtle about it, preferring to engage in the most inflammatory rhetoric possible.

OAN has reported that a ban on conversion therapy would “prohibit the sale of the Bible.” One OAN host, Kara McKinney, has ranted about “militant LGBTQ recruitment,” and for Pride Month said, “We of course pray for those suffering with same-sex attraction.”

McKinney also hosted a guest evangelical pastor who promoted the notion of a “White History Month” in place of celebrating Pride Month. During that segment, McKinney complained that LGBTQ people  “wield all the power in this country.”

OAN has taken a particular hatred toward transgender youth, with guests claiming being trans is a “trend” created by the left as an alternative to abortions.

AT&T isn’t the only company that is willing to jeopardize the republic if it results in a profit. Facebook is perhaps the best known offender — but Facebook at least turns a blind eye to lies and misinformation. AT&T is actually paying for it.

Since the Reuters report came out, AT&T has been downplaying its role in the creation of OAN. But who are you going to believe? Sworn testimony that Reuters found, or a statement from AT&T’s public relations department?

The only bright spot is that OAN has a relatively small following. Reuters estimates 8 million people visit the network’s website. Still, that’s about 8 million too many.