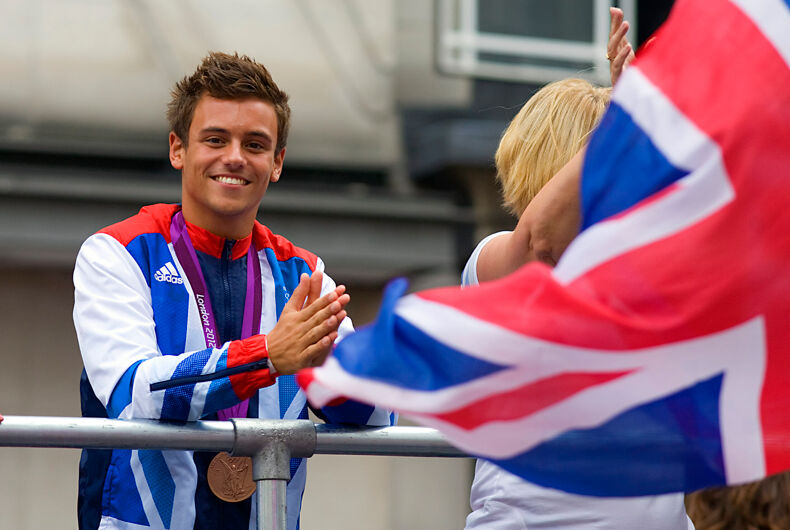 Out Olympic diver Tom Daley made a strong statement about his hopes for the next Summer Olympic Games while accepting the Attitude Sport Award at the 2021 Virgin Atlantic Attitude Awards.

“I want to make it my mission over the next, well, hopefully before the Paris Olympics in 2024, to make it so that the countries [where it’s] punishable by death for LGBT people are not allowed to compete at the Olympic Games,” Daley told the crowd at the ceremony.

Related: Judith Butler calls out transphobia as “one of the dominant strains of fascism in our times”

“I think it should not be allowed for a sporting event to host in a country that criminalizes, [or is] against basic human rights. So, that is going to be my mission now to change that,” Daley further declared.

He expressed his appreciation for being able to be himself and still represent his home nation. “It’s all well and good speaking about those things but I think it’s really important to try and create change rather than just highlighting and shining a light on those things,” he said.

According to the Washington Post, ten such countries are Afghanistan, Iran, Mauritania, Nigeria, Qatar, Saudi Arabia, Somalia, Sudan, the United Arab Emirates, and Yemen. The Human Dignity Trust records 61 other countries that also criminalize homosexuality or same-sex relationships in some fashion, including Egypt, Guyana, Indonesia, Pakistan, and others.

Daley did specifically call out Qatar, which is the host of the 2022 FIFA World Cup. “The World Cup coming up in Qatar has extreme rules against LGBT people and women,” he said, “and I think it should not be allowed for a sporting event to host in a country that criminalizes against basic human rights. So, that is going to be my mission now to change that.”

While accepting the award, Daley also thanked his diving partner, Matty Lee, who he credits for making his “childhood dreams… come true” by competing with him.

At the Olympics this summer, Daley bought home his first Olympic gold medal and another bronze medal to add to the previous ones he earned in 2008 and 2012.

At the games in Tokyo, Daley shot back at homophobic attacks on him in media around the world, namely in Russia state media.

“History shows that everything that society is, [and] has been, dictated from the straight white male experience. If we could come together and use different points of view, the world would be a better place,” he said. “There are lots of people who grow up around the world in less fortunate situations. I just hope that seeing out sportspeople will help people to feel like they are less alone, like they are valued, like they can achieve something.”

He is married to Oscar-winning filmmaker and screenwriter Dustin Lance Black, and they have a son, Robbie, together.

The International Olympic Committee (IOC) has yet to respond to Daley’s remarks or any efforts to ban countries that criminalize homosexuality. Daley’s remarks at the Attitude Awards can be watched below.