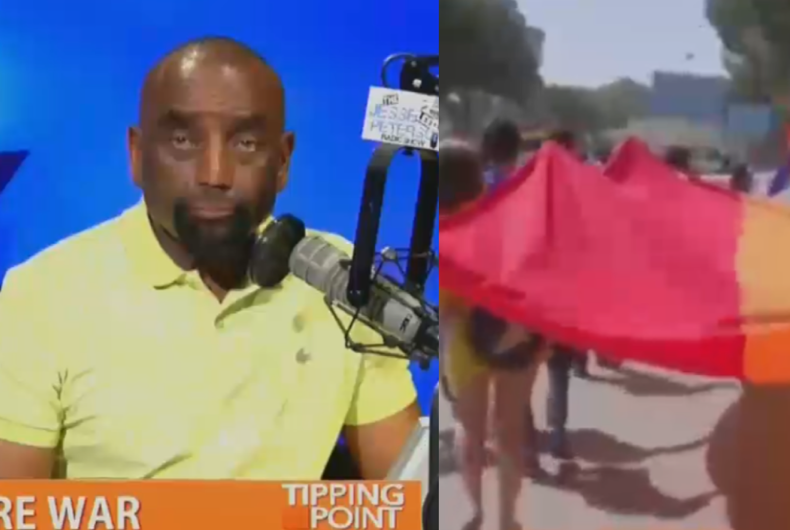 McKinney complained that LGBTQ people “wield all the power in this country,” and Peterson called for “bringing back” recognition of “white history” because people are now “afraid to mention” it.

“We must remember white history, because if it wasn’t for that, there would be no America,” he claimed, because “they’re afraid to even mention white history.”

Peterson is a far-right pastor and the host of the radio show Jesse Lee Peterson Show and online “Fallen State TV” show. His online channels have been demonetized by YouTube due to violating the site’s hate speech policy.

OANN bought him on to open Pride Month discussing those who “worship the altar of Pride” because of the “militant LGBTQ lobby.”

In the June 1 segment, Peterson focused on compelling Christians to end the “evil” and “perverted” celebration of gay rights. Instead, they should recognize “white history” for the month of July, despite how, according to Peterson, white people themselves have foregone doing so and “allowed” other cultures to celebrate their history for a month.

McKinney complained at the beginning of the clip that “back in the day… when the gay marriage debate was really taking off” LGBTQ people said, “It was ‘Well, what goes on in people’s bedroom isn’t anyone else’s business.'”

“Now of course they brought the bedroom to the streets,” she argued, “and now we have to visualize everything, see it all, hear all the gross itty-bitty degenerate details of other people’s lives.”

Peterson then complained that Christians “should have never fallen for this idea that ‘Oh, we [LGBTQ people] just want to come out of the closet. Just let us out of the closet.’ And then they said, ‘Oh, we want to go to church. But we don’t want to be talked about at church.'”

“A lot of preachers stopped mentioning that homosexuality is wrong” because they “fell” for that idea, Peterson claimed, and LGBTQ people “repent and return to God. Now they’ve taken over the churches.”

“I started White History Month,” Peterson explained, because he “noticed” that no one is recognizing white people’s contributions anymore.

“This is our fourth year,” he said.

“White people — invited all these other — allowed all this other stuff to happen but you can celebrate everything but white history. We must remember white history, because if it wasn’t for that, there would be no America,” he explained.

“They got Black history, women history, Mexican history, so-called gay pride. What’s happy about being perverted? There’s nothing good about that, living in sin… but we celebrate — I don’t — but they celebrate that,” Peterson claimed.

That’s why “we got to show our appreciation,” Peterson explained.

“And not one Christian should be celebrating gay pride. They should be praying that these people repent and overcome the fallen state, return to the father. God is not pleased in allowing that his children are allowing this.”

Peterson said that White History Month is necessary in light of the 100th anniversary of the Tulsa Race Massacre, because he doesn’t “believe that whole story about what happened in Tulsa” and thinks “Black people are not telling the truth” because “it’s not as dramatized as the race hustlers are making it out to be.”

“I don’t know the exact story, but it wasn’t a massacre,” he said later.

Peterson is known for protesting against causes he finds immoral politically or religiously, including the “evil” Nelson Mandela, the NAACP, and Amber Rose’s SlutWalk, where he infamously confronted march participants for years. He has been accused of misogyny by Fox News hosts and was once muted in an appearance on Good Morning Britain due to his homophobia by Piers Morgan.

He worries about men becoming “beta males,” straight people not calling each other “husband” and “wife,” and believes that allowing women to vote was a “mistake.” He also called for taking “all black people back to the South” to “put them on the plantation” in 2012.

OANN has a history of anti-LGBTQ bias. In 2018, they reported that a conversion therapy ban would “prohibit the sale of the Bible,” a claim that Snopes rated as false (the bill had nothing to do with the sales of any books, much less the Bible).

And their antipathy isn’t limited to LGBTQ humans. Last year, an OANN host called out a zoo for not announcing the sex of a penguin, saying that the zoo is attacking “traditional marriage” and trying to make people dependent on “the government” in a rambling rant.

Pride in Pictures: Pride during some very dark times