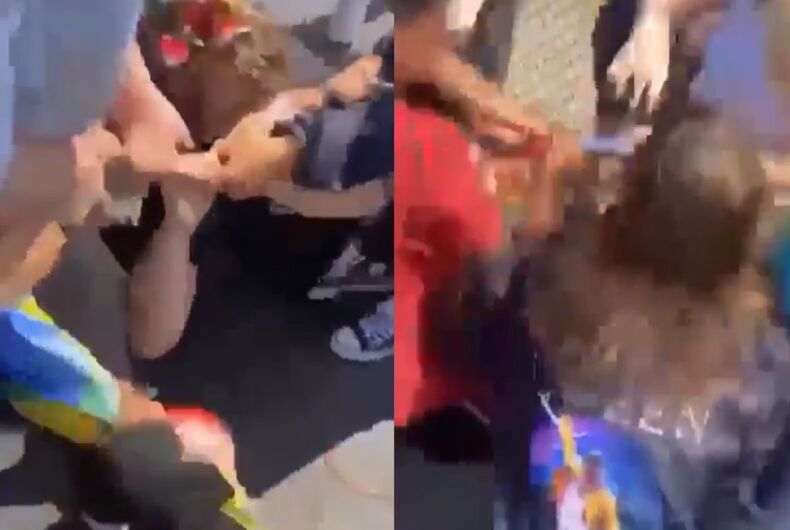 Video of the attack has gone viralPhoto: Twitter screenshot

The family of a non-binary 12-year-old is speaking out after the child was beaten up for wearing a rainbow flag to a picnic.

Several students at Seminole Middle School in Largo, Florida have already been suspended after student Leo Hoffman was beaten last Friday for wearing a rainbow flag at a school event.

“I hate to see someone’s kid expelled from school,” their father Benjamin Hoffman told Bay News 9. “But you can’t lay your hands on another person. It’s just not acceptable.”

According to the father, Leo attended a picnic at their middle school during an outdoor lunch period, a reward just before a four-day weekend.

They wore a rainbow flag as a cape when a male student confronted them. The boy grabbed the flag and put it in the garbage, but Leo went to get it back.

Another boy took the flag away again and pushed Leo to the ground and stepped on them.

Video of the attack has been shared online by Leo’s sister Ashleigh, and it has been viewed over 150,000 times so far. The video shows other children laughing as they stomp on Leo and try to take away the flag. When they get it, they start a tug-of-war for the rainbow flag.

“This is a video of my little sibling Leo who is non-binary being drug to the ground, stomped on, and covered in water just for wearing a pride flag at school,” said Ashleigh wrote when posting the video.

This is a video of my little sibling Leo who is non-binary being drug to the ground, stomped on, and covered in water just for wearing a pride flag at school. Please call Seminole Middle and request #justiceforleo at 727-547-4520 pic.twitter.com/VwNRidkeuj

Principal Dr. Michael Moss said that staff investigated the alleged attack during the Memorial Day weekend. A spokesperson for the school said that several students have been suspended and others were assigned to an alternative school.

“We teach our students to accept and respect everyone for who they are,” the spokesperson said, not disclosing how many students got suspended or for how long. “This is a district that values diversity and promotes inclusion.

“Administrators at Seminole Middle assured my office that disciplinary action was being pursued, and I hope the students in question will be able to learn from this and do better in future,” said Rep. Charlie Crist (D-FL), whose district includes the school.