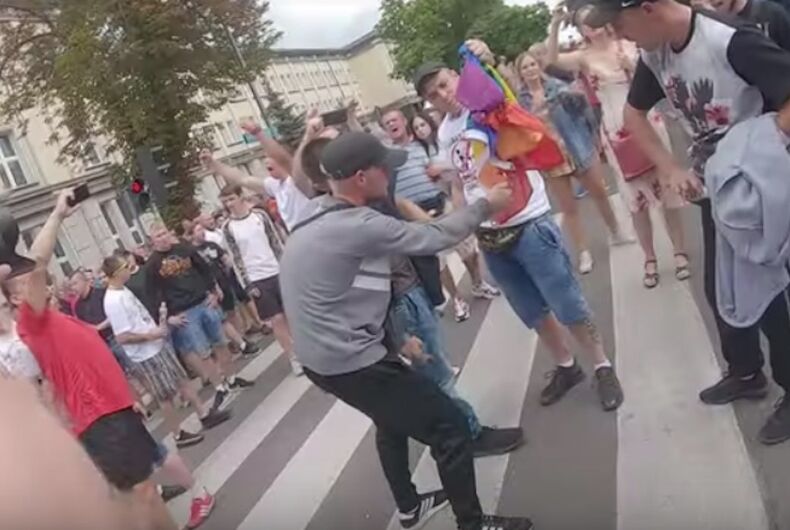 Hundreds of Pride marchers in Bialystok, Poland were met by a mob of thousands of angry counter-protestors who blocked their way, uttered slurs and threw eggs, rotten vegetable, bricks, stones and fireworks, according to The New York Times. Video also shows counter-protestors burning rainbow flags and ripping down pro-LGBTQ banners as a police helicopter whirls overhead and teargas gets shot into the crowd.

The Times reports, “Even before the march started, there were violent confrontations, and by the time the tear gas cleared and the crowd dispersed, dozens were injured and Poland was left reeling.”

The publication states that the anti-gay mob was riled up by “a steady diet of anti-gay political propaganda in the country” mostly provided by extremist groups, the church and the governing Law and Justice Party which has stepped up its anti-LGBTQ rhetoric in the lead up to Poland’s autumn elections.

As we’ve recently mentioned, anti-LGBTQ tensions have been rising steadily in Poland over the last few years.

Law and Justice Party leader Jaroslaw Kaczynski recently called on followers to defend Poland from “Western decadence,” stating, “We don’t have to stand under the rainbow flag.” Local Roman Catholic Church figures have spent the past weeks calling Pride events a “blasphemy against God.”

Related: “LGBT-FREE ZONE” stickers for businesses will be distributed in Poland

The Times reports, “A group in Warsaw called ‘Stop Pedophilia’ has been traveling the country smearing gay people with baseless claims of abuse.” The group also set up a tent in Bialystok to spread its message weeks before the march took place.

The tactic is similar to a tactic used by the Russian vigilante group “Occupy Pedophilia” which made videos of followers assaulting gay men in their own homes while claiming its victims wanted to rape boys.

According to the Times, “The police have identified over 100 people and accused them of attacking the marchers. At least 77 have been fined or charged. One man was accused of beating a 14-year-old boy.”

Here is video of the chaos at the Pride march: