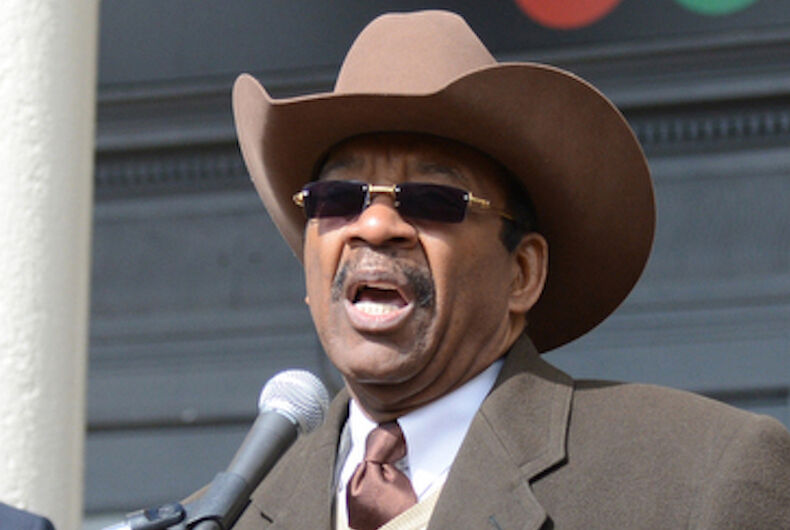 Rubén Díaz Sr., the 76-year-old homophobic Pentecostal minister turned New York politician, has been caught lying about a charity he used to run.

On his website, Díaz writes that he was “until recently, Executive Director of Christian Community Benevolent Association, Inc (CBBA) … a non-profit CBO geared toward helping the elderly and the needy …[that] presently employs 1,000 people and serves more than 5,000 senior citizens residing in Bronx County.”

Will Breddermann, a reporter with Crain’s New York Business, writes:

“A review of public records shows that the organization is a vastly smaller concern, and one continuously intertwined with his political, governmental and ecclesiastical operations…. The organization’s most recent tax returns show that it employs nobody, and its own president told Crain’s it no longer runs programs for the aging.

The tens of thousands of dollars it brings in annually are a fraction of its former revenues, but the group does not identify the source of the money and spends nearly all of it on ‘entertainment activities’ and unspecified ‘other general expenses.'”

Breddermann adds that in 2012, the charity’s CFO was accused of stealing anywhere between $75,000, and $400,000 in state government grants arranged by Díaz himself.

When Breddermann contacted Díaz to ask him about the discrepancies, Díaz reportedly told him, “You’re the reporter, you find out,” and then hung up on him.

Díaz is currently running a campaign against Ritchie Torres, a 31-year-old gay man, for a U.S. House seat  representing New York’s 15th congressional district. The seat is being vacated by Rep. José Serrano, the longest serving Hispanic member of Congress. Serrano is retiring due to illness.

Both Díaz and Torres are Democrats currently serving on the New York City Council. But Díaz has been virulently homophobic since his start in city politics in the early 1990s.

He opposed New York City hosting the 1994 Gay Games for fear that they’d spread AIDS and corrupt children. He also opposed marriage equality and the city’s Harvey Milk School for allegedly discriminating against heterosexuals even though the school admits straight students.