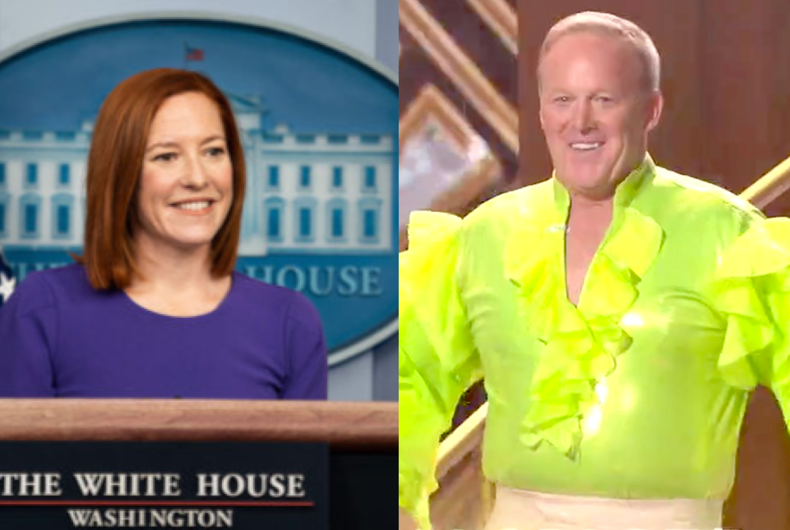 A profile in the New York Times this weekend details Jen Psaki’s tenure thus far as the White House Press Secretary. Media correspondent Michael M. Grynbaum credits Psaki for ending the White House daily press briefing’s status as an oft-televised and unavoidable spectacle. Instead, she helped return it to its traditional state as an informative, normal presentation — although the internet still loves Psaki’s snappy clapbacks.

Several Beltway veterans shared with the Times their respect and praises for Psaki, and even Peter Doocy, the White House correspondent for Fox News who Psaki often makes pointed responses to, expressed his appreciation for her. Only one person quoted in the story had negative things to say about Psaki: former Press Secretary Sean Spicer.

Related: Kayleigh McEnany rages over the “fawning” media coverage she thinks Jen Psaki is getting

Spicer, Trump’s first press secretary and current Newsmax mouth piece, bitterly told the Times, “I walked into the lion’s den every day — she walks into a bunch of kittens.”

He harped on one comment Psaki made in response to a question at a recent briefing, claiming that Psaki tried to slight her with her answer. Psaki was asked last week about Trump appointments to non-partisan posts — including Spicer and former Trump aides Kellyanne Conway and H.R. McMaster — being asked to resign by the White House.

A reporter asked Psaki whether there was “any concern” from the Biden White House about the appointees “politicizing these traditionally non-controversial positions.”

“I will let others evaluate whether they think Kellyanne Conway and Sean Spicer and others were qualified or not political to serve on these boards,” Psaki said, “but the President’s qualification requirements are not your party registration; they are whether you’re qualified to serve and whether you’re aligned with the values of this administration.”

The response simply explained Biden’s position, that the Trump-era appointees simply weren’t the best officials to serve his administration in the position and carry out his agenda. Although they have consistently attacked Biden and his agenda since his presidency began, Conway and others have somehow taken offense to not being included in it.

Now Spicer is personally offended that Psaki reiterated the White House’s position to the media. “Jen chose to stand and question my qualifications and services to this country. Once she did that, the gloves were off,” he claims.

The Times reports that despite his claim that Psaki called into “question” his service, Psaki once defended Spicer when she worked for CNN in 2017. “It’s a really tough job, everybody screws up,” she said at the time, when Spicer was getting criticized for calling Nazi concentration camps “Holocaust centers.”

The Times also notes that White House correspondents interviewed for the story, including Doocy and The Grio‘s April Ryan, disagreed with his suggestion that he had faced tougher answers in his so-called “lion’s den” as Press Secretary.

Other than Spicer’s petty snide, much of the profile focuses on Psaki’s long journey to getting the top communications job in the country, after getting passed up for the gig twice as a communications aide in the Obama administration, which “devastated” her.

Still, despite the hardships, Psaki pressed forward, and got the Press Secretary job on her third opportunity, when Biden became President. She prepped with former Obama-era co-workers for weeks, figuring out how to take on the grueling, critical questions that became commonplace at White House press briefings.

She has intentionally tried to issue responses in “straightforward, detail-dense” ways, with an emphasis on interpreting Biden’s words as best as possible. That often results in Psaki coming across as shady or short with reporters in clips that millions on social media love and share.

The Times reports that she has had moments where she admits she didn’t issue the best responses to reporters, and she has gotten critique from President Biden for some responses. Still, though, White House correspondents and prominent political officials largely describe her positively as “professional.”

The only critique offered of her in the profile comes from Charlie Spiering, the White House correspondent for the far-right publication Breitbart, who said he finds Psaki “boring.”

Even Doocy, who is often on the other side of Psaki’s responses to conservative media, told the Times, “It never feels like I’m getting smacked down or vice versa. I understand why it looks like that, some of the ways that stuff gets clipped, but it doesn’t feel like that in the room.”

Doocy even expressed his appreciation that Psaki recognized the fact he got married during one press briefing, and offered her congratulations. Then she issued yet another snappy response to one of his questions.

Whether intentional or not, Psaki’s responses to Doocy and other conservative reporters have grown into instant sensational “#PsakiBombs” online. The Times cites several fans that celebrating her remarks on social media by saying “yasssss queen!”

Spicer, meanwhile, is described by the Times as a “B-list” celebrity after his six-month stint fronting for Trump. In a ranking list of former Press Secretaries with new jobs, the magazine Washingtonian said “we probably don’t have to tell you who comes in last,” referring to Spicer, who worked for Extra and now Newsmax, in between a stint on Dancing with the Stars.

Psaki’s alleged “shade” directed at Conway, Spicer, “and others,” is seen below.