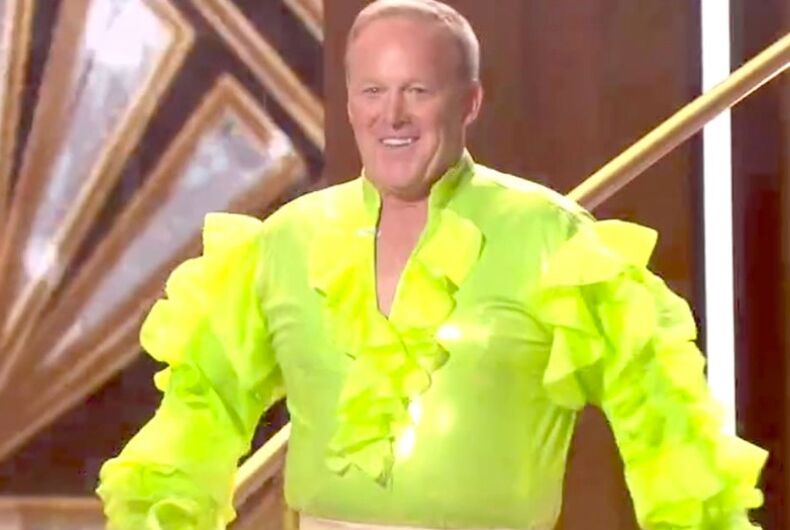 Sean Spicer on Dancing With The StarsPhoto: Screenshot

The former mouthpiece of the Trump administration wore a neon green samba shirt and high waisted white pants for an uninspired dance with Lindsay Arnold to the Spice Girls “Spice Up Your Life.”

This is what life is now. #DWTS @seanspicer pic.twitter.com/heFCEwfjfT

The judges were unimpressed, with one comparing the performance to an insect attack.

“What were you doing there?” said judge Bruno Tonioli. “It’s like you were being attacked by a swarm of wasps.”

Tonioli also said that he found the performance “strangely entertaining,” which seems like quite a bit of faint praise.

Prompted by the internet’s worst comedian and former Arkansas Governor Mike Huckabee, Spicer is calling on a higher power to judge his performance.

“Wanna create an emotional meltdown in Hollyweird?” Huckabee said on Twitter. “Vote for @seanspicer to win ‘Dancing with the Stars’ tonight and every night he’s on. @seanspicer is a good guy and a brave sport to go on DWTS. Let’s show him some love!”

Oh yes, and he included an animated gif from Napoleon Dynamite, because of course he did.

Wanna create an emotional meltdown in Hollyweird? Vote for @seanspicer to win "Dancing with the Stars" tonight and every night he's on. @seanspicer is a good guy and a brave sport to go on DWTS. Let's show him some love! https://t.co/UNI7xXVtwh pic.twitter.com/hlb2LeUFar

Spicer, in a now-deleted tweet, replied, “Thank you @GovMikeHuckabee Clearly the judges aren’t going to be with me. Let’s send a message to #Hollywood that those of us who stand for #Christ won’t be discounted. May God bless you.”

He since pulled the message back into a less dramatic reply, saying simply, “Thank you @GovMikeHuckabee Really appreciate your support and prayers.”

Thank you @GovMikeHuckabee Really appreciate your support and prayers https://t.co/Qqa9xi3pIM

God could not be reached for comment, but given He allowed Spicer to wear that tight top, it can only be assumed that he’s staying far, far away.