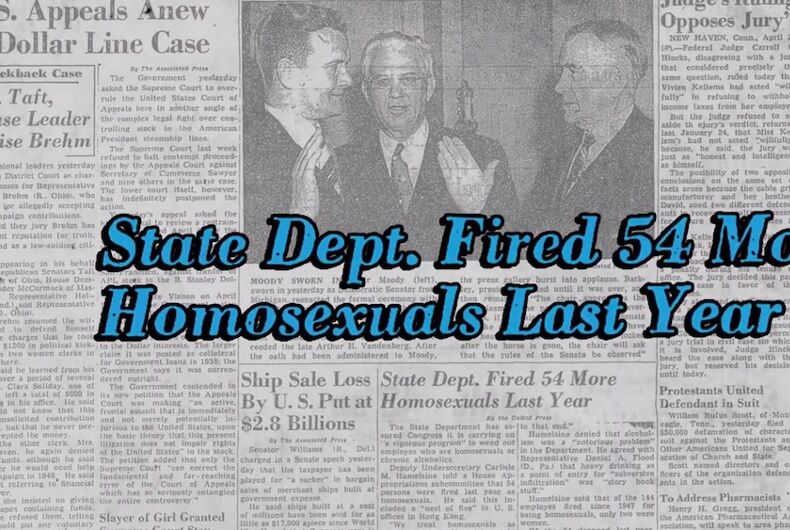 One of the darkest stains on American history was the persecution of LGBTQ people. Bar raids, employment purges, entrapments — the tactics used to harass and ruin the lives of LGBTQ Americans were lengthy.

What is worse is that the federal government was often at the forefront of the attacks. From the lavender scare of the McCarthy era to Don’t Ask, Don’t Tell, government policy was structured to target LGBTQ people for discrimination and dismissal.

To remind people of that persecution, the Mattachine Society of Washington, D.C. has collected hundreds of documents that prove the federal government’s role as a leader in harassing LGBTQ people, especially employees.

In a new video titled “The Acknowledgment,” the Mattachine Society lays out the history of the persecution and the case for a formal government apology.

Using what it terms “archive activism,” the Society has collected a haunting record of the extensive attacks on LGBTQ people by the government. The Society has been aided in its research by the law firm of McDermott Will & Emery, which worked pro bono on the project.

“It is important for the truth of what happened to not be buried,” says Jeff Trammell, Chairman of the Mattachine Acknowledgment and Apology Project. “We owe it to the men and women who were persecuted.

The government regularly fired civil service employees for “immorality.” The video quotes a government personnel official supporting the firing of gay employees on the grounds of “revulsion.”

“Most men look upon homosexuality as uniquely nasty, not just a form of immorality,” the official said.

Getting fired or discharged dishonorably from the military was bad enough. Some of those who were committed suicide. Worst of all, some of those targeted were committed to St. Elizabeth’s, a federally run mental institution. There patients were subjected to unwarranted treatments, including electric shock therapy, that can best be described as torture.

Because the doctors at St. Elizabeth’s were federal employees, they were in the position to influence federal policy and the medical profession in general. It was, the video says, “the headquarters for federal policy discriminating against gays and lesbians.”

Mattachine is taking its findings to Congress to urge for an acknowledgment of the past practices and apologize for them. Sens. Tim Kaine (D-VA) and Tammy Baldwin (D-WI), the latter of whom is an out lesbian, have introduced a bill in the Senate that would do just that. A similar bill in the House is sponsored by Reps. David Cicilline (D-RI) and Mark Takano (D-CA), both out gay men.

It’s not as if such an apology is unprecedented. Congress have acknowledged past injustices, apologizing to Native Americans, Japanese Americans and Native Hawaiians, among other marginalized groups they’ve harmed. Other governments, including Canada and the United Kingdom, have apologized for their persecution of LGBTQ people.

The apology would be largely symbolic — the bills do not seek reparations for those harmed by the decades of persecution. But even as a gesture, the apology would mean a lot to many.

“Apologies go a long way toward healing,” says Lisa Linksy,  a partner at McDermott Will & Emery. “Saying we are sorry means saying we will do better, that we will not let this happen again.”