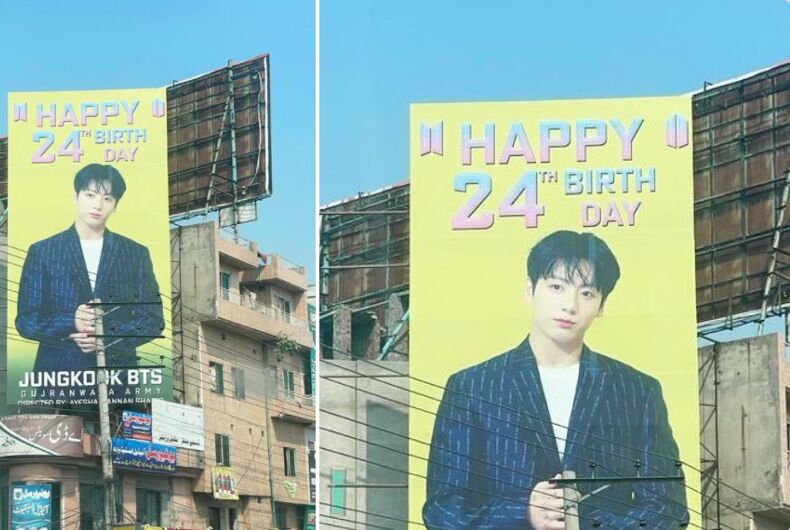 A billboard in Gujranwala, Pakistan that wished a boyband singer a happy birthday has caused an uproar after local authorities removed it for “promoting homosexuality.”

The sign was erected by fans of the popular BTS K-pop band. None of the members are out as part of the LGBTQ community and it should go without saying that seeing a billboard will not turn someone gay.

The Korean group’s fans are particularly vocal about their love for the band and have become a force to reckoned with online, organizing several actions to protect democracy, demand justice, and screw up rightwing efforts to promote bigotry and racism.

This has put them on a collision course with authoritarian governments around the world. Earlier this week, China called on broadcasters to avoid the “sissy boy” singers for fear of “promoting homosexuality.”

The K-pop singers are not traditionally masculine and have softer features and perform upbeat and positive songs.

“We received a lot of complaints from people. There was so much commotion,” assembly candidate Furqan Aziz Butt said. “There are young people in this city. This group has a negative influence on them and encourages them to behave in wrong activities. They promote homosexuality.”

While the ludicrous claims about the Asian band have been widely mocked around the globe, it hasn’t stopped right wing politicians from lobbing allegations that make them look like idiots.

“The Gujranwala incident has hurt Pakistan’s BTS Army very badly,” Zainab Zaman, a 24-year-old fan from Islamabad said. “A politician just comes up out of nowhere and says that BTS is promoting homosexuality and spreading vulgarity. BTS has never used vulgar verses in their songs. They are just about loving yourself and being happy. Doesn’t he know how much he is ruining Pakistan’s image?”

Earlier this year, a Russian printer refused to make BTS posters because they could be deemed illegal “gay propaganda.”

Pakistani Armys!!
A billboard of jungkook in gujranwala was taken off today because some people said it is promoting h0m0sexual!ty…lets tell these mfs that how much we love jungkook and bts and lets trend these hashtags#WeLoveYouJungKook #PakistanlovesBTS#BTSisPakarmyspride pic.twitter.com/vUlETeoEZq

Want to know how to raise thriving kids? Follow the stories of these amazing LGBTQ parents.