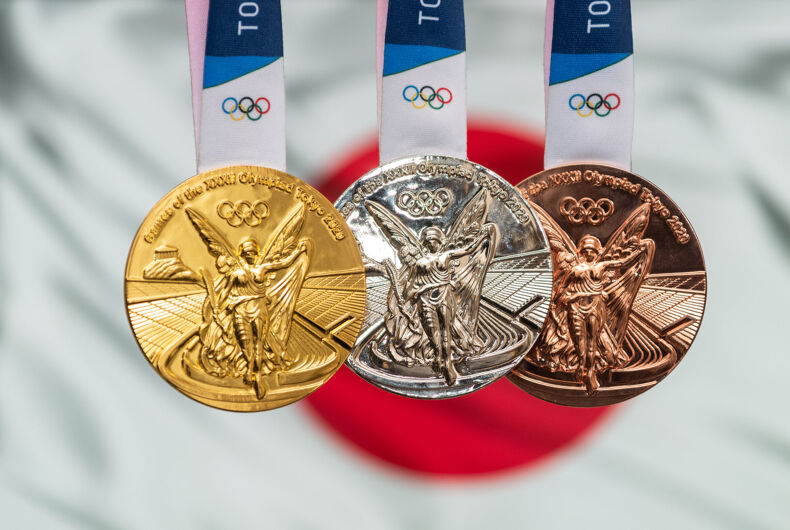 The Paralympics concluded in Tokyo yesterday, and out athletes — affectionally and unofficially included in “Team LGBTQ” — made the world proud throughout nearly two weeks of competition.

Out athlete Monique Matthews was on the squad that earned America a gold medal in sitting volleyball. Out goalball player Asya Miller won a silver medal along with Team USA, but they fell just short of the gold medal. Out triathlete Hailey Danz won a silver medal, and Kaitlyn Eaton and Courtney Ryan were two out athletes that helped win a bronze medal for Team USA in wheelchair basketball.

At least 20 other out LGBTQ competitors earned a medal in competition, according to Outsports.

This follows the Paralympics hosting a record amount of athletes that openly identified as LGBTQ, with their latest count of athletes reaching 36 at the close of the Games. That’s a record high compared to any other Paralympic Games, and triple the number recorded at the last Paralympics, where there were 12 known out athletes.

The United States and United Kingdom led the way with out athletes with nine each. Brazil had six, Canada had three, and Australia, Germany, and the Netherlands each had two out athletes on their squads as well. Ireland, Israel, and Mexico had one out athlete each.

Like the Olympics, they were postponed last year due to the coronavirus pandemic, but they are still officially referred to as the Tokyo 2020 Paralympic Games.

The Paralympics opened on August 24, 2021, and held 539 different sporting events until the Games closed yesterday on September 5 (Japan is across the International Date Line). Second Gentlemen of the United States Doug Emhoff represented the United States at the Games’ opening.

Team LGBTQ showed out at the Paralympics, just as they did at the Olympics before them.

Robyn Lambird became the first openly non-binary athlete to win a Paralympics medal when they earned the bronze in the 100-meter T34 wheelchair sprint on August 29.

Otherwise, nearly all the out athletes at the games were women. The only out male athlete is Great Britain’s Lee Pearson, an 11-time gold medalist in para-equestrian sports.

Just as the more than 180 out Olympians combined for more medals than almost 200 competing national teams, the out Paralympians are hoping for a successful Games for themselves and their teams, but Team LGBTQ as well.

Now, the world begins to look on to Paris for the next Summer Olympics in 2024. Before that, though, the 2022 Winter Olympics are scheduled to begin in six months in Beijing.

Matthews, the only out American athlete who earned gold, was a key player in Team USA’s victory.

#SittingVolleyball champions again!#USA successfully defend their women's title after a 3-1 win over #CHN in a repeat of the #Rio2016 final.#Tokyo2020 #Paralympics @paravolley pic.twitter.com/j4RRMExlKI

She said prior to the Games, “I love seeing our out Paralympians highlighted because it shows that while we still have a ways to go, as a society, we have become more accepting therefore people are able to be their authentic selves and feel safe. It gives me great pride to be part of such a diverse trailblazing group of people.”

The women of USA know how to volley 😏

Still, the team lost to Turkey and settled for the silver.

The @USAWGoalball team claimed the silver medal Friday after a 9-2 defeat at the hands of defending Paralympic champion Turkey. It marks the 12th Paralympic medal for USA Goalball and the seventh medal won by the women’s team. Eliana Mason and Asya Miller tallied the U.S. goals. pic.twitter.com/HVoKSan5Id

A record number of out, #LGBTQ+ athletes are competing in the #TokyoParalympics right now— nearly triple the amount that competed in Rio in 2016! One of those is USA’s Asya Miller, who started competing at the Sydney Games in 2000 and is looking for her fifth Olympic medal. pic.twitter.com/UzBtGrdEjI

For the second time in a row, Danz won a silver medal in triathlon competition. The gold was won by Allysa Seely, another athlete on Team USA.

Danz came out only last year and said “For the first time in my life, I’m proud to be gay.”

🥈 Danz repeated her Rio 2016 silver win in Tokyo after she was beaten by teammate Allysa Seely.

🌈 “For the first time in my life, I’m proud to be gay,” she stated before the Games, after coming out less than a year ago. pic.twitter.com/hyJ5miWRoH

In wheelchair basketball, Houston native Kaitlyn Eaton and Arizona-based Courtney Ryan fought to get the team to bronze.

"Having that camaraderie and attitude about getting out there and playing hard, to your level and with each other as a unit, is something I have been able to carry over from Arizona to Team USA. I’m really, really grateful to be a part of the Arizona family." – Courtney Ryan🇺🇸 pic.twitter.com/IXYnamdZF3

The women's wheelchair basketball team showed up and showed out for bronze. #TokyoParalympics x @NWBA

Gonna need to see that selfie! 🤳