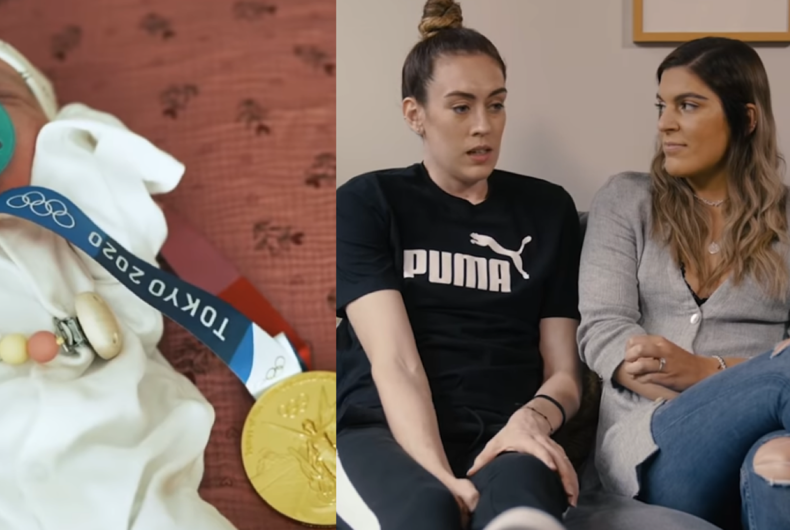 Prior to winning gold in Tokyo, Stewart was chosen as one of five Sportspersons of the Year, the top honor issued by Sports Illustrated, in 2020. Xargay won a silver medal with Spain in 2016 and just retired from basketball in July after being part of nine championship teams and three gold medal-winning Eurobasket teams in her career.

The baby, Ruby Mae Stewart Xargay, was born via surrogate on August 9, 2021, the couple revealed first to People magazine.

In a new short film with Bleacher Report, Stewart revealed she considered giving Ruby the middle name “Tokyo” following the win. Xargay didn’t care for it as much, though.

Stewart said she didn’t always know she would marry and have a child with a woman, but she says, “[Xargay’s] the one I want to be with, and we are living our best life.”

“I hope this continues to show people that there is no perfect way to find love or have a family,” Stewart said.

Stewart has not only been one of the most decorated out athletes in history, but since 2010 — when she was 16 — she has become one one of the most decorated basketball players ever. She has won three USA Basketball Female Athlete of the Year awards, two ESPY Awards, two WNBA championships alongside two Finals MVP Awards, the WNBA MVP Award, and the WNBA Commissioner’s Cup as well as Commissioner’s Cup MVP honors.

Stewart plays for the WNBA’s Seattle Storm, where she won the league’s latest championship. Stewart is also a teammate of Sue Bird, the co-creator of TOGETHXR, which co-produced her Bleacher Report documentary.

Stewart was profiled for Sports Illustrated by Megan Rapinoe, Bird’s fiancée and the magazine’s solo choice for the honor in 2019. So far, Stewart is only the fourth woman athlete to receive the Sportsperson of the Year honor.

Amidst criticism for selecting a white player from a mostly-Black athletic league, Sports Illustrated Co-editor-in-chief Stephen Cannella said in a statement, “Breanna Stewart was the top player for the WNBA champion Seattle Storm and was named Finals MVP. She did all that less than a year after suffering a career-threatening injury.”

Stewart dedicated her season in honor of Breonna Taylor, a Black paramedic killed by police in her own home.

Xargay, in her 12-year professional career, earned astonishing amount of accomplishments across continents. Born in Girona, Spain, she began playing basketball at six and by the age of 14 was attached to a professional basketball club.

She would end up winning a EuroLeague championship, two Spanish League championships, three Spanish Cup championships, and a silver medal with Team Spain at the 2014 World Cup — all before coming to the WNBA in 2015 to play for the Phoenix Mercury. She was a member of the Mercury team this offseason for the first time since returning to other overseas leagues in 2016.

Stewart and Xargay have been dating since 2019. They began their relationship while playing together in Russia, right after Stewart was injured. Stewart said that she decided then to freeze her eggs, which she has called “probably one of the best decisions I’ve ever made in my life.”

She began thinking about “her future” for the first time following the injury, leading her to want a child. “Why can’t I be the best player and have a baby? Why can’t we do both?” Stewart recounted.

She said that trying to have a family while playing sports was what she wanted, but “As a women’s basketball player, it’s like, ‘OK, how do you do that? How do you plan that perfectly so the baby comes during the summer?’”

Although they were “cutting it close” with the Olympics, Stewart credits her surrogate for working with them to make the process possible.

A mayor & thousands of businesses asked a city council for civil rights law. The council voted no.