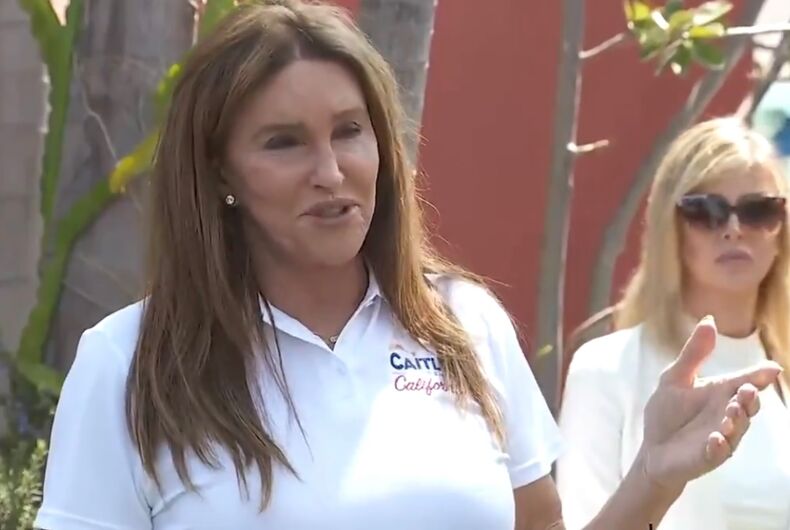 California gubernatorial candidate Caitlyn Jenner is receiving bipartisan criticism for her inconsistent mask-wearing. The 71 year-old most recently visited Plumas, California, following the area’s devastation at the hand of the Dixie Five.

During the two-day trip, people observed that Jenner wore masks sometimes, but not at times, such as when she was around babies or indoors speaking. She addressed her lack of wearing, instead assuring people online that she was only wearing masks because of the smoke from the fire, not to prevent potential spread of coronavirus or other viruses.

Jenner has made her opposition to current Gov. Gavin Newsom’s (D) pandemic lockdown policies, especially when it comes to churches and schools, as one of her main campaign issues. Her first campaign ad didn’t say much about Jenner’s policies other than that she is critical – but doesn’t outright oppose – public health measures taken in reaction to the coronavirus pandemic.

While she is far from the only Republican candidate to express opposition to Newsom’s pandemic policies, Jenner has not clarified what she would actually do or have done instead. While other candidates in the recall have spelled out their opposition to any mandates or challenged the legality of mask or vaccination policies, Jenner has only hinted at an every-person-for-themselves approach.

Jenner has encouraged followers to “follow the science” and get vaccinated, but as for her own masking policies, she said in July: “I believe in Californians, our right to live freely and make decisions for ourselves.”

That has left followers and opponents to observe her own masking behavior to gauge if she was leading by example on any of her future policies.

Being a media spectacle isn't a good thing Caitlyn. We've had a reality show personality in government once, I'm not looking for another.

Put on a damn mask while you have all that attention though.

I am horrified you are holding that baby while not wearing a mask. It’s truly insane behaviour

Wear a damn mask. I am so disappointed in you.

On her trip to Plumas on August 19 and 20, Jenner made several posts to social media, just as she has done throughout other stops on her statewide campaign bus tour ahead of the ahead of the recall election concluding on September 12.

On both days, Jenner made posts showing her meeting with people, inside and outside, without wearing a mask.

Posts showing Jenner meeting with large groups of people, in close proximity to each other while in confined spaces, raised eyebrows online.

The resolve of the people is truly inspiring up here. We need to ensure victims have housing and access to timely financial resources for those affected by wildfires and natural disasters. pic.twitter.com/IoGNkJdKIW

Utter devastation and loss. This small business owner has lost everything. We have to help and rebuild pic.twitter.com/qHgr3p6vRP

This is how we work for solutions. Open dialogues with local leaders and experts on how best to combat fires and contain them quickly in CA. I’m in Plumas with our first responders and local leadership to address real solutions – not politics as usual pic.twitter.com/vFautZkWgN

“No one is wearing a mask 😷,” one top comment on Jenner’s Instagram post of a few pictures from the trip read, starting with a photo of her sitting at a conference table meeting with several other unmasked individuals.

Jenner also posted another picture of her sitting outside on a bench. In this one photo, she is wearing a mask.

The worst wildfire in our states history and our fire budget has been cut by the governor. Unacceptable to the amazing people of California. Too many people have lost everything in this disaster. pic.twitter.com/PMpPBgOATo

The disparity caught the attention of both her detractors and fellow conservatives alike.

Greg Pollowitz, editor of the conservative social media aggregate site Twitchy.com, was among those who pointed out the apparent inconsistency in Jenner’s mask-wearing.

“Someone please explain the science behind Caitlyn Jenner’s mask usage,” he said in one tweet.

In fact, someone did try to explain it — Jenner herself.

“There is a mask outdoors because it is extremely smoky and raining ash from the fires,” Jenner claimed in response to Pollowitz. “Have you been to a burn zone?”

In further replies from supporters, Jenner did not deny that her mask-wearing was inconsistent — in fact, she tried to assuage concerns that she was suddenly supportive of wearing masks.

There is a mask outdoors because it is extremely smoky and raining ash from the fires. Have you been to a burn zone?

It’s because of the wildfire and the heavy smoke

“I am anti-mask mandate. This mask was because of the smoke from the raging wildfires,” she said.

“It’s because of the wildfire and the heavy smoke,” she continued to try explaining.

It appeared hard for observers to take her at her word, especially as she had posted multiple pictures on both days not wearing the mask while outside, when observing the aftermath of the fire she claimed was producing unbearable smoke.

Pollowitz even expressed disbelief in her claim.

Caitlyn Jenner says the mask was for the smoke not Covid. Um, ok https://t.co/nXqmOVhN6a pic.twitter.com/e9iu7dbhxb

Some noted that a regular surgical mask and other fabric masks that have become standard during the pandemic are not designed to prevent smoke inhalation, because they are meant to prevent particles from travelling outward more than they are for preventing absorbing of particles.

A N95 mask is recommended by scientists for the purpose of preventing smoke inhalation — although scientists are currently recommending mask-wearing amidst the pandemic anyway, even if you’re fully vaccinated, because of the Delta variant, and skyrocketing transmission rates.

Then you are wearing the wrong mask, girl.

14,716 new cases were documented in California data added on August 20, with the positivity rate (currently 6.1%) being higher than it was last week and a month ago.

That information has not persuaded Jenner, who so far on her campaign is appearing to fail to adhere to the science and public health protocols in the name of her “personal choice.”

You know what else makes it nearly impossible to breath….Covid

After just returning from Australia. https://t.co/zxiVmF56kQ

The only redeeming thing about this picture is that she's wearing a mask.