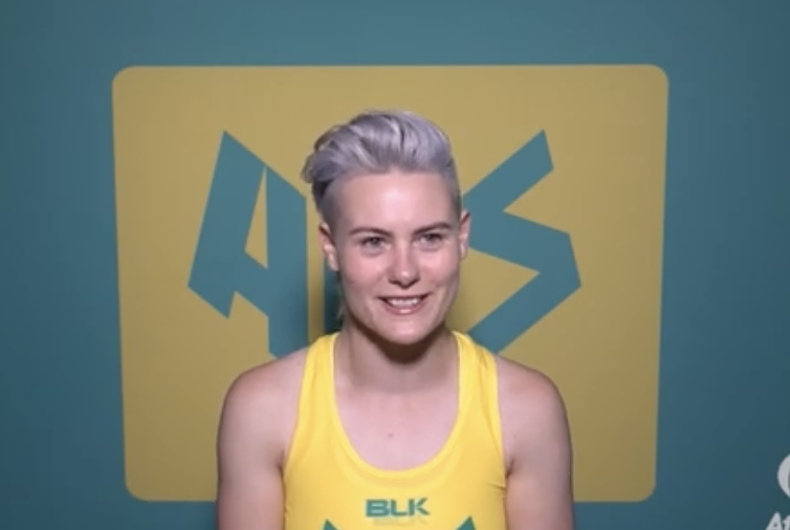 Robyn Lambird has become one of the first openly trans or non-binary athletes to earn a medal at the Paralympics. Lambird won a bronze medal in the women’s 100-meter T34 wheelchair sprint on August 29.

Lambird, who is 24 and uses they/them pronouns, becomes just the second trans and non-binary person to medal in either Olympic or Paralympic history, which was only seconds behind two record-breaking performances.

The Paralympics already have a record number of out athletes competing in the pandemic-delayed Games through next week. Since Outsports released an initial list of 23 out athletes, 11 more of the 539 total competing Paralympians have been added.

“I’ve been really training hard for the past six years, so to end up on the podium really would really be a dream come true,” Lambird said in an interview earlier this month.

They made their dreams come true with a time of 18.68 seconds in the race.

Hannah Cockroft of Great Britain earned gold in the event after being timed at 16.39 seconds, a world record. Fellow Briton Kare Adenegan earned the silver with 17.03 seconds

“It is my first (Paralympic) Games, it’s been almost a 10-year dream so to be here and to win a medal among the best in the world… it’s awesome,” Lambird said post-race.

“I just want to show all the kids out there – with disabilities or not – if you have a dream, chase it,” they added. “There’s always a way, and you can find that way.”

The 24 year-old also had some fun when being presented with the bronze, motioning as if they were going to pick up the gold medal, garnering some added fanfare for them on social media.

Lambird joins their fellow Australian Maz Strong and Team USA’s Laura Goodkind, who identifies as gender neutral, as the first out trans and non-binary athletes to compete at the Paralympics.

Lambird has lived with cerebral palsy since they were nine and trained to become a Paralympian since they were . Outside of racing, they are also a model and disability rights advocate.

Earlier this summer, Laurel Hubbard of New Zealand, Alana Smith of the United States, and Quinn of Canada were the first out trans and non-binary athletes to compete in Olympic history. Quinn went on to become the first trans Olympian to win a gold medal, or any medal ever, with Team Canada’s win in women’s soccer.

Robyn Lambird is now in the record books as the first out non-binary Paralympics medalist ever!!! https://t.co/B8TeaAnjvA

"I just want to show all the kids out there – with disabilities or not – if you have a dream, chase it … there's always a way, and you can find that way."

Hey, it was an honest mistake 😂

Bronze medallist Robyn Lambird almost picks up the wrong medal in the victory ceremony for the women’s 100m – T43 and it’s a good laugh for everyone pic.twitter.com/XUuwbR5SgS

His friends dumped him when he came out. So a park full of strangers helped him celebrate.