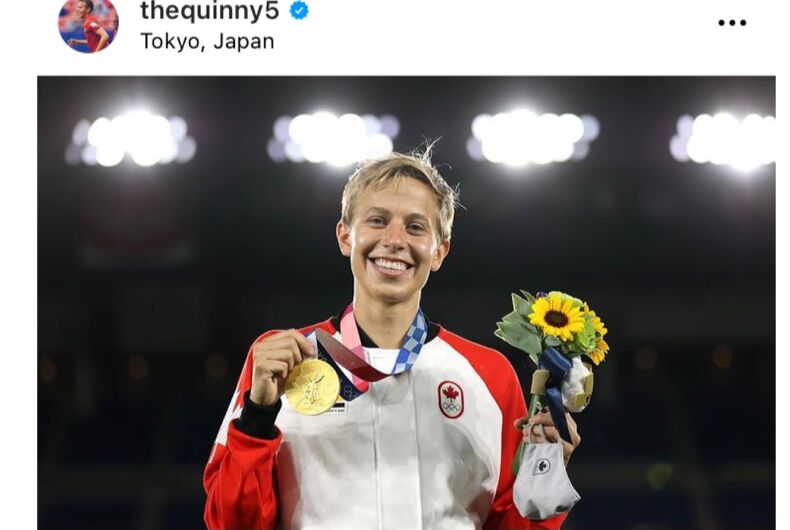 Soccer player Quinn became the first out transgender athlete, and the first non-binary athlete, to win a gold medal at an Olympic Games. They won the medal as a member of Team Canada.

With Team Canada’s advancement to the Olympics finals match last week by defeating Team USA, Quinn was guaranteed to become the first out trans and non-binary athlete to win a medal in Olympic competition. Now they have made further history by obtaining the top prize.

Team Canada earned gold by defeating Team Sweden in a shootout by a score of 3-2 after a 1-1 tie. That leaves Sweden with the silver medal and Team USA, who defeated Team Australia in the third place game, with the bronze.

Quinn, who turns 26 next week, closes out a historic trip to Tokyo by becoming the first out trans and non-binary athlete to compete at the Olympics ever, the first to win an Olympic match, and the first to earn gold.

They played in all six games, started in five and played in over 300 of the team’s 600 minutes of competition, both as a midfielder and forward.

A soccer star for the Canadian women’s national team, Quinn came out as transgender in September. On July 21, before the Opening Ceremony even commenced, they became the first openly trans athlete to participate in Olympic competition.

Two others would compete: Laurel Hubbard, a trans woman weightlifter from New Zealand, and Alana Smith, an American non-binary skateboarder. Neither would medal in their competition, however. Chelsea Wolfe also represented the United States on their inaugural BMX squad, but did not compete as she was an alternate.

After competing in the team’s opening match, Quinn posted to Instagram following their participation that they “don’t know how to feel.”

“I feel optimistic for change,” they said.

After winning the gold, Quinn made another post with their new medal simply saying, “Olympic Champions! Did that really just happen?!?”

So far, LGBTQ athletes at the Olympics have compiled 26 medals in Tokyo, including eight gold medals, five of which were earned by Quinn and their four other out teammates, Kadeisha Buchanan, Stephanie Labbe, Erin McLeod, and Kailen Sheridan. That would put “Team LGBTQ” in tenth place if they were an official team on the Olympic ranking chart.

Quinn won a bronze medal in the 2016 Summer Olympics but wasn’t out at the time. Quinn also plays in the National Women’s Soccer League (NWSL), currently for the OL Reign in Seattle, making them a teammate of out American soccer star Megan Rapinoe.

“…Seeing it up close every day & the way that they live their joy, it’s just amazing,” Rapinoe said after losing to their usual teammate and before they won the gold medal, “So, I hope they go get that gold.”

Halo video game announcer was asked to say “Trans rights.” He went well beyond that.