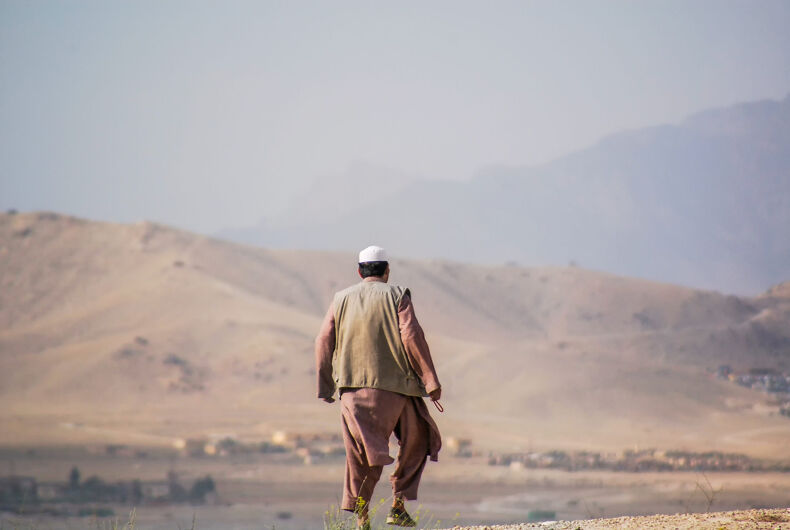 A Taliban spokesman has dispelled any notion that Afghanistan will remain a democracy, saying the country will likely be governed by a ruling council similar to the last time they held power.

“There will be no democratic system at all because it does not have any base in our country,” Waheedullah Hashimi told Reuters. “We will not discuss what type of political system should we apply in Afghanistan because it is clear. It is sharia law and that is it.”

With the withdrawal of international troops from Afghanistan, the Taliban swept back into power, taking control of the government within 11 days. President Joe Biden has taken criticism from both the left and right for his handling of the pull-out and evacuation of American citizens and Afghan allies.

Thousands of people have tried to flee, overrunning American flights out of the airport and gathering in huge crowds outside of embassies and other facilities. Biden has been particularly criticized for not preparing for the quick takeover and being caught flatfooted by the crush of desperate would-be refugees.

Afghan citizens and their families who worked with Americans are vulnerable to retribution and the imposition of shariah law would also endanger women and LGBTQ people in particular.

Gay people, a Taliban judge promised earlier this year, will be prosecuted and executed by stoning or pushing a wall on top of them.

“For homosexuals,” judge Gul Rahim said, “there can only be two punishments: either stoning, or he must stand behind a wall that will fall down on him. The wall must be 2.5 to 3 meters high (8 to 10 feet).”

“Afghanistan already is not a safe place to be LGBTQI+ people,” according to Rainbow Railroad, an organization that helps LGBTQ refugees escape oppressive countries.

“According to the U.S. State Department, public attitudes across the diversity of Afghan society towards LGBTQI+ people are extremely negative, which leads members of the LGBTQ+ community to keep their gender identity and sexual orientation a secret in fear of harassment, intimidation, persecution, and death. Now, with the return of the Taliban, there is understandable fear that the situation will worsen.”

While the Taliban is earning the horror and shame of America and much of the world, they have earned at least one person’s respect and praise — Tucker Carlson.

The Fox News host explained to his audience that the collapse of the Afghanistan government to Taliban military forces is what the Afghan people want because they “firmly rejected what our leaders were selling it over 20 years.” He claims America tried to force “radical gender politics” on the country and they rejected it in favor of the “patriarchy.”

Earlier this year, police in the northwestern African country of Mauritania arrested 10 young men for “acts contrary to morality, committing acts forbidden by Allah, and circulating a ceremony of debauchery.” The men were attending “the birthday celebration of a homosexual.”

Mauritania, an Islamic republic with zero LGBTQ civil rights, criminalizes homosexuality as a violation of shariah law with an allegedly non-enforced death penalty. Article 308 of the country’s 1983 Criminal Code says, “Any adult Muslim man who commits an impudent or unnatural act with an individual of his sex will face the penalty of death by public stoning.”