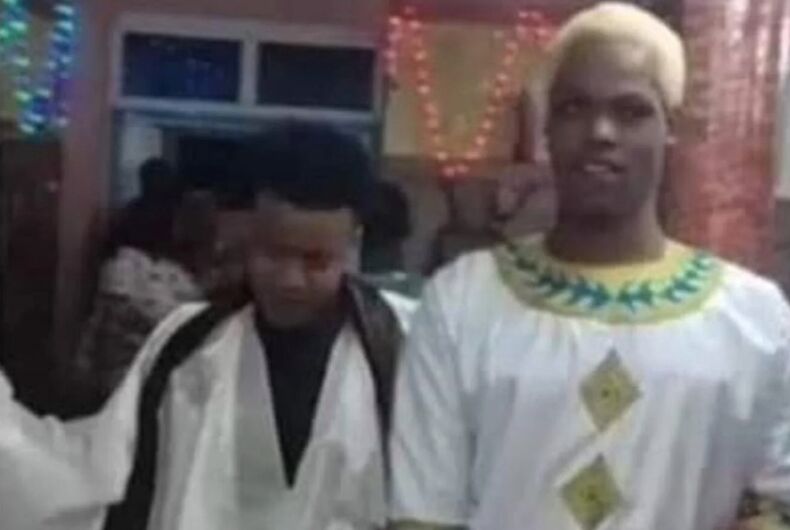 A screen shot of the alleged "gay wedding" that resulted in 10 men's arrests in Mauritania, Africa.Photo: Screen capture

Police in the northwestern African country of Mauritania have arrested 10 young men for allegedly participating in a January 11 same-sex wedding. The arrests occurred in the capital city of Nouakchott after video of the event surfaced on social media.

Nouakchott police commissioner Mohamed Ould Nejib said that the “wedding” was actually “the birthday celebration of a homosexual” attended by gay domestic workers.

The 10 men were arrested a week after the event and are now in prison awaiting court hearings for “acts contrary to morality, committing acts forbidden by Allah, and circulating a ceremony of debauchery,” according to a government official.

Mauritania, an Islamic republic that with zero LGBTQ civil rights, criminalizes homosexuality as a violation of Sharia Law with an allegedly non-enforced death penalty. Article 308 of the country’s 1983 Criminal Code says, “Any adult Muslim man who commits an impudent or unnatural act with an individual of his sex will face the penalty of death by public stoning.”

“[The arrests are] a serious attack on the individual and collective freedom of these young people who have the right to display their difference and intimate preferences,” said Brahim Bilal, president of a Mauritanian human rights organization.

A 2011 State Department report states that there are no LGBTQ rights organizations operating within the country.

Secretary of State Mike Pompeo considers anti-gay laws a form of “religious freedom.” The Trump administration has said that its financial aid to foreign countries will no longer depend on LGBTQ rights, a change from the Obama administration.

Homosexuality remains illegal in more than 33 African countries. Many of these countries, though not Mauritania, had their anti-gay laws instated by British invaders during the country’s imperial era in the 19th and 20th centuries.

You cannot be pro-life & anti-LGBTQ