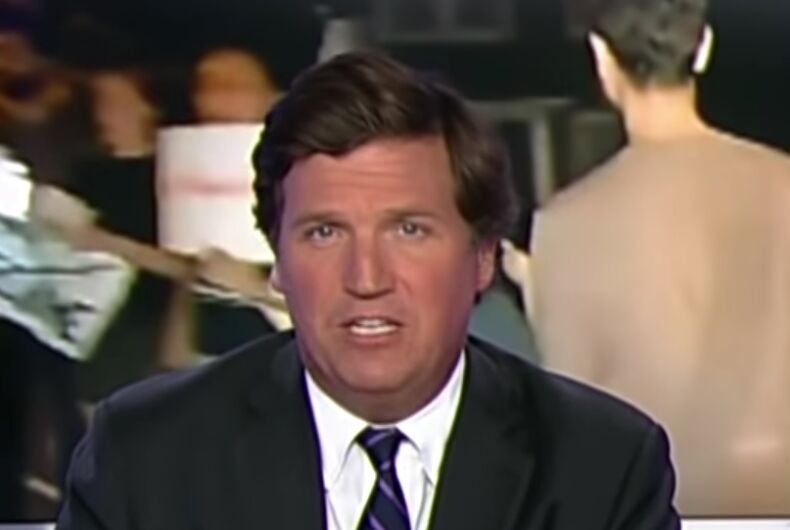 While the Taliban is earning the horror and shame of America and much of the world, they have earned at least one person’s respect and praise — Tucker Carlson.

The Fox News host explained to his audience that the collapse of the Afghanistan government to Taliban military forces is what the Afghan people want because they “firmly rejected what our leaders were selling it over 20 years.” He claims America tried to force “radical gender politics” on the country and they rejected it in favor of the “patriarchy.”

The tirade over gender equality came after the Taliban took control of the Afghan capital of Kabul and the country’s male president fled the country.

“Thanks to American-imposed gender quotas, dozens of women ultimately were installed as representatives in Afghan’s parliament,” Carlson complains. “How did that work? Well, the whole thing was a sham, as always.”

“It caused revolts, but officials kept doing it, they kept pushing radical gender politics anyway, because they could, because they were in charge of these Stone Age people they were going to educate. This is the face of the late American empire, gender studies seminars at gunpoint,” he claimed.

“It turns out that the people of Afghanistan don’t actually want gender studies symposia. They didn’t actually buy the idea that men can become pregnant. They thought that was ridiculous,” he continues.

Undoubtedly for him, those “gender studies symposia” include the “neoliberal” policy of recognizing that trans and gender non-conforming people can exist and shouldn’t be killed for that. Carlson has regularly mocked and denigrated trans people and anyone else that dare accept their existence.

He claims the Taliban rejects that because “They don’t hate their own masculinity. They don’t think it’s toxic, they like the patriarchy, some of their women like it too, so now they’re getting it all back. So maybe it’s possible that we failed in Afghanistan because the entire neoliberal program is grotesque.”

Tucker Carlson claims we lost to the Taliban because of gender studies. pic.twitter.com/ACD8C7F3ZQ

The “neoliberal program” that Carlson describes was a democratically-elected government which did not kill any gay people in the country, as the Taliban pledged it would do if it returned to power just last month.

“For homosexuals,” Taliban judge Gul Rahim said, “there can only be two punishments: either stoning, or he must stand behind a wall that will fall down on him. The wall must be 2.5 to 3 meters high (8-10 ft).”

Carlson told millions that the people wanted that as opposed to gender equality.

Unsurprisingly, many with a mind of their own did not find any credence to his argument.

tucker really is dumb as dog shit. i know that gets overlooked a lot bc of the racism and sexism and fascism but i dont think we should forget that hes one of the dumbest mfers on tv

Tucker Carlson blaming the fall of Afghanistan on trans people, instead of the fact that corruption and graft led to an ANA that was underfed, hadn't been paid on months, and knew that the US wouldn't save it.

JFC, it's like he never talked to a field grade officer who was there https://t.co/9KGnhBONHV

After 9/11 Dinesh D'Souza wrote a book arguing that al Qaeda's critique of a decadent America was correct, because liberals are bad.

Tucker Carlson does the same thing here, saying the Taliban are protectors of the patriarchy which is what Afghans are right to want. https://t.co/hCV3NJiQOD

Tucker Carlson seems to be saying that allowing women to serve in the Afghanistan government is the reason why the country is in chaos and he praises the Afghan people who didn't like it: "Why would they?" pic.twitter.com/pM2YwTHHOz

A gay man passed a warning note to a woman on her first date. She listened.