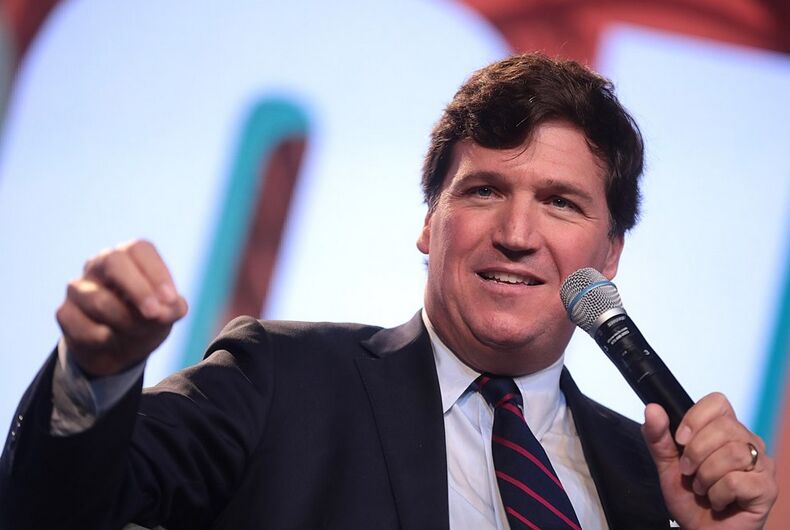 Fox News host Tucker Carlson has been exposed as a longtime anti-LGBTQ activist after a clip from his college yearbook includes a reference to clubs venerating a racist and the killer of a gay icon. Harvey Milk, the groundbreaking out politician who urged gay people to “come out,” was assassinated by former San Francisco policeman Dan White.

Carlson is listed as a member of the “Dan White Society” and the “Jesse Helms Foundation.” Helms, a Republican former senator from North Carolina, was notoriously racist and viciously anti-gay.

Carlson had curiously defended himself on his television show the night before from “a mentally unbalanced middle-aged man” who had been looking at his “dusty college yearbook.”

Tucker Carlson says that the Washington Post has been reaching out to his college classmates pic.twitter.com/Nrgh6ORD0L

Apparently, Carlson was referring to Washington Post journalist Erik Wemple and the references to the groups made in his yearbook. It’s not apparent whether or not the groups actually existed or if Carlson was simply trolling. Both options would be in character for the far right blowhard.

Perhaps this is the story that @TuckerCarlson was trying to get ahead of. In his college yearbook, he listed himself as a member of the "Dan White Society."

Dan White was the man who murdered Harvey Milk. pic.twitter.com/TYklyfC8tS

It isn’t the only time Carlson was openly homophobic in college either. Activist Jeremy Hooper dug up an op-ed the pundit wrote for the school’s newspaper that decried articles and letters to the editor in support of LGBTQ rights. He used his standard “aggrieved straight white man” routine bellowing that it is unfair to critique homophobia as, well, homophobic.

As Hooper points out in a later tweet, Carlson was not a columnist for the paper.

“This topic is what bothered him enough to pause his day and pushback,” Hooper tweeted. “Telling.”

And yes, I confirmed he is the only one who could fit these initials.

Correction: Tucker seems to have written exactly one more editor letter in his time at Trinity. This one (from 1987) was so he, a man, could tell a woman how she should feel about being a woman. pic.twitter.com/N1N8ogAl2Z